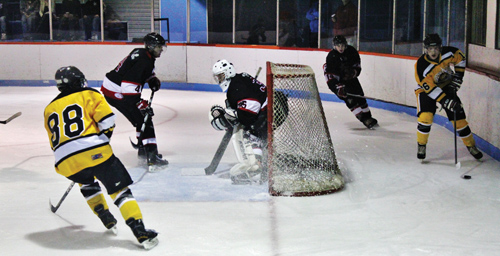 The Pontiac Juniors playing against Almonte

The Pontiac Juniors playing against Almonte

The Pontiac Lions Midget B hockey team started off its season with 2 wins: a 4-3 win against Les Loups, in which Cedric Cahill and Cody Laurent made scores, and Laurent and Austin Duggan made assists, October 12; and a 1-0 win, October 13, against the Frontaliers de Hull, in which Michael O’Rieilly scored, assisted by Cedric Cahill.
The team played against the Gatineau Patriots, October 19, in Shawville with the Patriots scoring with 9 seconds left in the third period,           signalling a 1-0 loss for the Midgets. The team played in Masham against the Wolves, with a tied score of 1-1, October 27. Cedric Cahill scored for the Lions, with Bryce Atkinson and Mikael Lalonde assisting.
Submitted:
Dale Morgan-Horner

The Fort-Coulonge Midget hockey team, the Comets, played against Westmeath, October 21, for its first game of the season. The game started out well, with Westmeath scoring the first goal. Yannic Morrissette from the Comets tied the score, after a cross pass from Nathan White.  Westmeath scored again, breaking the tie, but Morrisette tied the score again after a pass from White. Morrissette then scored on a one-timer pass from White, with the team leading the score. After a scramble in front of the Comet’s net, Westmeath tied the score 3-3 with 1 second left on the clock. Maxime Graveline and Jacob Lavigne also had an assist in the game.
Submitted: Jim White

The Pontiac Juniors played against Alexandria, with a loss of 8-5, which put the team on a four game slump. October 25-27 offered a spark for the Juniors in a game against Almonte. “They were off to a good start,” said President Ryan Barber. “The coaches and players prepared with work in the defensive zone and back checking.” The Juniors were up 5-0 after only the first period. Almonte ended the game with three goals.
Moving to Perth a couple days later, the Juniors won 5-4. “The team was out of the gate fast with the 3-0 lead,” said Barber. “It was nice to get a couple wins and the points,” added Barber. The team moved up a spot in their division, from last place to fifth.
A total of 224 people watched the Juniors’ first two home games. November 3, in a game against Arnprior, the team won 6-1. The team will be playing November 8 against Renfrew and November 15 against Stittsville.
Submitted:
Scott Campbell