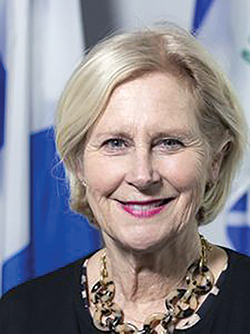 MRC PONTIAC – Incumbent warden Jane Toller is running for re-election and said she’s dedicated to continuing to build on her contributions from the past four years. She’s confident she’s the optimal leader to help complete a number of important projects.
“As the initiator of these projects, I’m the only person who will be able to see them through,” she claimed. Toller highlighted the creation of the MRC’s youth council (paused due to the pandemic), as well as her efforts to help build an indoor swimming pool in Fort-Coulonge and make the Pontiac a host for a potential energy-from-waste facility.
Toller added that she’s proud to contribute to reinvigorating the local forestry industry by helping to create sustainable business plans to reopen local sawmills, notably in Rapides-des-Joachims and Davidson. “When I was elected, it was said that forestry was dead. I hope to hear some good news shortly … it will create a lot of jobs and most importantly, [make] the Pontiac a player in forestry again,” she explained.
Toller is working to see the Pontiac Community Hospital’s obstetrics unit reopened and hopes the recently announced nurse bonuses will help address staffing shortages. “By the summer … we should have
a strong hospital again,” she said.
Toller said she supports the plan to build a wood transformation bio-park in the region and the MRC Pontiac will keep working with the federal government to fund more research for its potential development.
“This isn’t a plan that’s going to be [operational] tomorrow,” Toller said, stating the MRC Pontiac has invested nearly $1 million in the project. “A lot of work still needs to be done and I’m 100% behind it. Now, funding for further research needs to come from other levels of government or a major investor who will actually build the facility,” she added.
Last November, Toller, frustrated with a lack of progress on the file after 8 years, voted to end the contract of the MRC’s forestry consultant Pierre Vezina unless federal funds were secured as well as a commitment from a private company to locate their wood recovery facility in the Pontiac.
Toller said the region needs more affordable and rental housing development. “It’s very difficult to find this right now. We need to ensure we have enough spaces so seniors can stay here,” Toller said.
For the future, Toller said it’s imperative for mayors to make the most of their democratic right to vote. “It’s healthy to have debate and for people to vote according to how they see fit. I’d like to see less politics and obstruction and more progress because I feel an urgency for action and I encourage mayors to be the same way.”
Toller claimed the region is experiencing a period of economic revitalization and population growth, so she’s optimistic for what’s to come. “We have a population boom in all 18 municipalities and we have investors coming in great numbers,” she said, noting she prioritizes protecting and revitalizing the Pontiac.
“Everybody has a purpose in life. Mine is to revitalize the Pontiac,” she concluded.