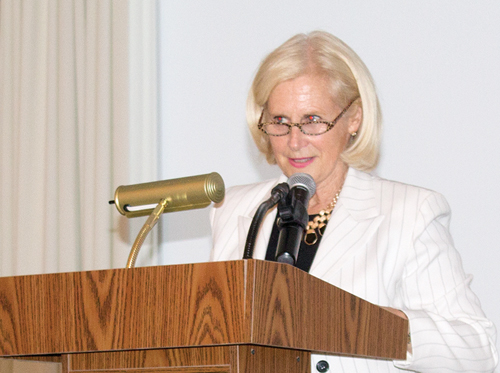 FORT-COULONGE – Jane Toller, local businesswoman and president of Tourism Pontiac, officially announced her candidacy for warden of the MRC Pontiac, September 7 at the Pontiac Conference Centre. Nearly 80 people attended.
“This region needs more vision and someone who has a vision and the capacity to accomplish the goals set forward. Jane has proved she has this ability,” said Jim Coffee, owner of Esprit Rafting, who has worked with Toller in the past on tourism development.
Platform reveal
With the use of the word PONTIAC, Toller revealed her platform. P for prosperity; O for opportunities – both those missed and those on the horizon; N for natural resources; T for tourism; I for infrastructure – taking a look into sewer/water systems as well as social infrastructure like her proposed indoor pool project and possibly a bowling alley; A for agriculture – many opportunities exist, but farmland needs to be made more accessible for future farmers; and C for connections – consistently getting the 18 municipalities to work together.
When the issue of amalgamation between Fort-Coulonge and Mansfield was brought up, Toller stated it is not a priority at the moment. “It’s not important to me at the moment because it has caused a large divide between town members. Now is the time for us to come together and be united,” she explained.
Big visions
Among some of the more pressing things on Toller’s list of hopeful future accomplishments as Warden are seeing the indoor pool project to its completion, having a connecting bridge built between Ile-du-Grand-Calumet and Fort-Coulonge to facilitate travel, converting the Hennesy House in Fort-Coulonge to a Francophone college in order to entice younger generations to stay in the area, lowering taxes and municipal contributions, increasing MRC transparency and, ultimately, job creation.
A question of language
Toller hosted her conference in both french and english and stated she is dedicated to becoming fully bilingual in the near future. While undergoing french training, she will hire a translator to ensure the fluidity of information during her
campaign and time as warden if she should be elected.
Fully committed
How does such a busy businesswomen intend to balance the work of a full-time warden? Toller stressed she is willing to step down from many of the committees she is currently part of, and hire management staff for her businesses in order to dedicate 100% of her attention to being warden. She assured everyone present that she is taking the role extremely seriously and that she would make
the position her full-time commitment.
The night ended with Toller stating her campaign slogan is “NOUS AVANÇONS!”, followed by a standing ovation.