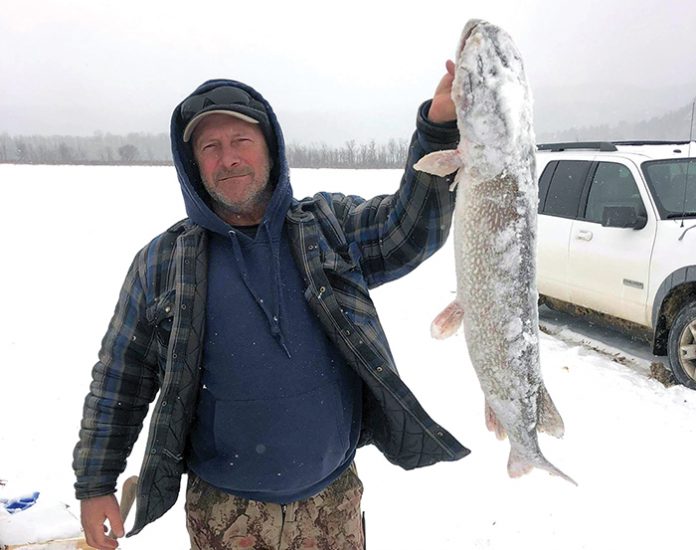 Brian Smith, of Chapeau, displays his catch: a 14.5 lb pike.

MRC PONTIAC – A day of ice fishing was held at Pine Lodge in Bristol on March 1, and at Brennan’s Recreational Farms, in Sheenboro, on March 2, as part of Pontiac Tourism Association’s Lake2Plate promotion. Film crew Five2Nine, from Chelsea, was on-site both days to get footage for the winter episode of the four season project.

Lake2Plate features unique fishing experiences in the Pontiac, accompanied by a locally sourced or created meal; it is funded by Tourisme Outaouais, SADC Pontiac, MRC Pontiac, and MAPAQ.

Once complete, the series will be available on the Pontiac Tourism’s YouTube channel: Explore Pontiac. Currently there is one episode on the site with another planned for release in April. This winter episode will be released in November 2022.

After cutting their fishing holes in the ice the participants caught a variety of sizes and species of fish, including pike and cat fish. In Sheenboro, local angler Daniel Poirier demonstrated his skills with filleting the catch.

As well as Brennan’s and Pine Lodge the episode will feature Jeff Roberts, a mixologist from Shaken’Up Chapeau and La Ferme Northfork, who showed his skills creating cocktails made from Tap & Cork Route products; a beer tasting held at L’Ancienne Banque Restaurant and Brew Pub in Chapeau; and the final dinner, using the fish caught, created by Chef Robert Belanger from Café Robina, located in the historic George Bryson House, Mansfield. Dee Brun, a travel blogger and former cocktail deeva on CBC’s Steven and Chris, hosted the episode which included a stop at Emma Judd’s new B&B “Circa” located in Shawville.

Lorna Agnesi, Pro-Mayor of Sheenboro, spoke of tourism in the Upper Pontiac region, noting cycling routes, three Outfitter businesses, as well as hiking trails at Brennan’s Hill, Oiseau Rock, and the Sheenboro Nature Preserve, which is also a popular winter destination. While touring the historic Ottawa River, Agnesi suggested that boating enthusiasts could drop anchor at Hotel Pontiac, in Fort William, for a meal and some music. She concluded: “Hospitality PLUS sums up our community.”