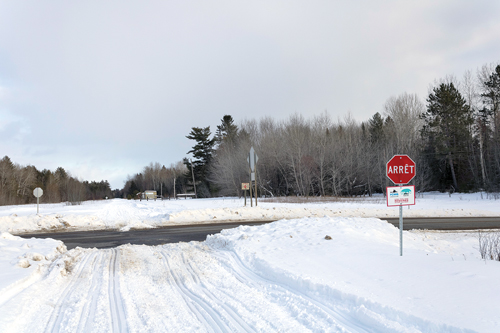 MRC Pontiac – The Journal contacted the Pontiac Snowmobile Drivers’ Association (PSDA) and Club Quad du Pontiac for their reaction to the recent adoption of an MRC bylaw officially changing the CN railway corridor’s designation to recreo-tourism, allowing ATVs (summer/ fall) and snowmobiles (winter/spring) to use it in Bristol, Clarendon, Litchfield, and Portage-du-Fort
PSDA
The bylaw doesn’t change much for snowmobile club, which is primarily interested in protecting its investment in two bridges, worth over a million dollars.
Vice President Ralph Young commented saying, “It’s a great idea to protect the
corridor for tourism, bring in money and improve the economy,” as long as at some point snowmobilers are not prevented from using it during the winter. In general, he said the PSDA thinks it is a good thing so the line can’t be resold to adjacent landowners.
“We’ve been leasing and using the railway bed for about the last five years after we helped reconstruct the bridge to Ontario [at Portage],” said Young. Along with other
factors, this has resulted in 956 memberships this year, up from about 400 members in the first year after the bridge was finished. Young said in addition to increasing sales frommemberships, the local economy has benefited from sales of fuel, accommodation and restaurant offerings.
The same process is underway with a bridge between Pontiac Station and Fitzroy Harbour that would eliminate crossing on the ice and open up a tourism corridor from one end of the Pontiac to the other, and beyond. The PSDA is waiting to hear about extending its lease with CN that would link into the existing PPJ trails, allow snowmobilers to go east into Québec and follow four trails off the CN trail bed.
Young explained that PSDA originally approached Club Quad du Pontiac to use the corridor in their off-season, which would help with the cost of the lease; however they were turned down several times.
Young claimed Club Quad stated they were happy with their existing right-of-ways.
Club Quad du Pontiac
President René Barrette said the corridor would be a great option for the Club, as members currently use the road, and would access it if it’s free, although he said it isn’t clear if there would be costs associated with their use.
Regarding the PSDA’s request to join them with leasing the corridor, Barrette said members voted against it primarily because of the cost: $50,000 as a contribution to the inter-provincial bridge plus an annual cost of about $7,000/year for the lease contract and insurance.
“Ontario people don’t want to drive from Renfrew to get to the trails when they can trailer ATVs to Otter Lake or Shawville and drive directly onto trails,” Barrette explained. Additionally, he had concerns about the dust on the corridor, which he said is like creosote given that stone dust was never applied. “My doctor said it’s cancer-causing,” he added.
Barrette was unsure if the designation will promote tourism. For an extra $100, Québec ATV riders can get a pass for Ontario, and vice versa. This year the Club Quad opened a trail to Leslie Park, and sold 100 more passes than last
year, with an additional 300 passes sold to Ontarians for the whole Outaouais; a quarter of that $25,000 revenue goes to Club Quad du Pontiac for their share, with three other clubs awarded a quarter each.
Now that the bylaw is approved, it must be sent to the government for approval. According to Cyndy Phillips, MRC director of economic development, there are still a lot of details to iron out and discussions to take place.