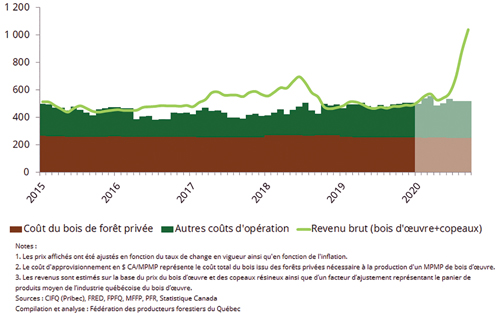 QUÉBEC – The year 2020 was record breaking for lumber prices, with many products doubling or even tripling in cost on store shelves. However, it doesn’t appear wood producers are benefitting from the upturn.
Mark Jennings, an Upper Pontiac woodlot owner, saw the increased price for finished lumber and thought it was a good time to harvest some of the wood on his
private property. “I called the wood producers’ board in Shawville to ask what the price of wood was and was told it hasn’t gone up one cent for producers. So, who’s making the money?” he asked.
When asked about the price discrepancy, the Pontiac Wood Producer’s Board referred the Journal to The Fédération des producteurs forestiers du Québec (FPF).
With a huge increase in teleworking due to the pandemic, coupled with low interest rates, the construction industry has boomed, especially for new homes in suburban or rural areas, increasing the demand for softwood lumber. But with many mills closed, the increased demand comes at a time when production capacity of the lumber industry is already under pressure.
“The current context is very favourable for North American saw millers. The pandemic has caused an overheating of the demand for lumber, while production capacity is insufficient in the short term…The imbalance between supply and demand has created conditions of scarcity, resulting in record profitability for sawmilling operations,” said Vincent Bouvet, FPF forestry economist, in an online notice.
In 2020, lumber prices averaged $747/MMBP, up 58% over the previous year. “It’s highly probable that these companies have never been so profitable,” wrote Bouvet, who believes the situation will remain favorable for mills throughout 2021.
“The average price of lumber is expected to remain at approximately $690/ MMBP, well above its historical average of around $570/MMBP since 1996…The revenues generated by exporting sawmills in 2021 are expected to be greater than those in 2020,” he explained.
With sawmills making record profits, what is the explanation for the discrepancy between the price offered to producers and that of the finished product?
“A number of structural changes and market anomalies point to possible answers: the significant decrease in the number of sawmills over the last 20 years has led to market consolidation; a market structure characterized by few buyers and a multitude of small log suppliers; the growing predominance of mechanized harvesting favours quantity and constant production to the detriment of the price obtained at the roadside; and transportation costs limit producers to a limited number of potential buyers.”
While the skyrocketed lumber prices may have caused a number of headaches for consumers, like increased costs for new builds and renovations, Pontiac MNA André Fortin says there are some positives. “It may help with the profitability of future mills in the area and government analysis of these projects,” he said, noting however that the overall problem in the area remains: “Our mixed forest requires an industry that values pulp wood as well,” he concluded.
The MRC Pontiac’s proposed Biomass Conversion Centre project seeks to make use of the overabundance of pulp wood or biomass by processing it into energy
and other beneficial products (see page 6).