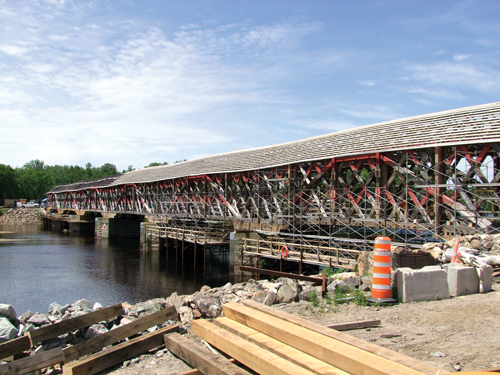 The expected completion date of the Marchand Bridge renovation has been extended until October 2021.

MANSFIELD – Work on the Félix-Gabriel-Marchand Bridge rehabilitation project in Mansfield began April 30, 2018, and although construction was supposed to last only two years, it continues. The completion date was extended a couple of times, most recently until August 2021, but according to the Ministry of Transport (MTQ), it won’t be finished until at least October.
“The project had to be delayed due to multiple additional work requirements. [We] had to replace several damaged parts that were not [accounted for] in the initial plans and specifications. In addition, work was required to raise the bridge approaches, and weather conditions, including rapid snow melt, required the contractor to remove the walkway,” said Rosalie Faubert, MTQ communications agent.
As a result, the initial price tag of just over $5 million may become heftier: “The costs cannot be disclosed at this time as the work is still in progress. However,
they will be made public at the end of the work,” said Marie Chantal Baguia, MTQ communications agent.
The firm Eurovia is doing the work, which includes reinforcing and straightening the structure, replacing the roof and panelling, reconstructing the deck, and replacing damaged or deficient components.
“The contractor is prioritizing other more urgent activities and will be finishing the roof in parallel. The Ministryis doing everything possible to provide a safe heritage structure to the public as quickly as possible,” concluded Faubert.