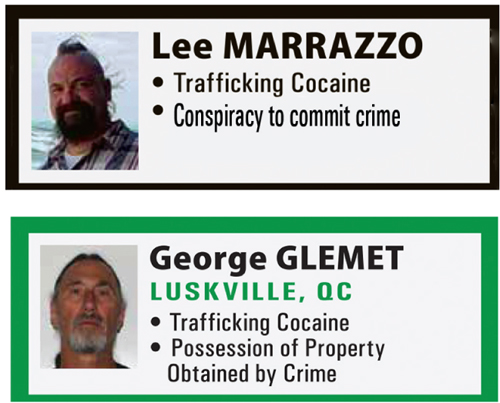 MUNICIPALITY OF PONTIAC – After a nine-month complex investigation under Project New Haven, sixteen residents of Québec and Ontario are facing charges for 138 offences under the Controlled Drugs and Substances Act, Criminal Code of Canada and the Cannabis Act. On October 15, twelve search warrants were executed in Ottawa, Gatineau and Luskville leading to the charges.
Two of those charged are from Luskville: Lee Marrazzo, 37, faces two charges – trafficking cocaine and conspiracy to commit a crime; and George Glemet, 64, faces three charges – trafficking cocaine, possession for the purpose of trafficking, and possession of property obtained by crime over $5,000. Both men were released and are set to appear in court in Ottawa this month. Six of the accused were held in custody.
The investigation was a joint effort between the Ontario Provincial Police (OPP) Organized Crime Enforcement Bureau (OCEB), Provincial Asset Forfeiture Unit (PAFU) and Biker Enforcement Unit (BEU), with assistance from the Sûreté du Québec (SQ). The goal was to disrupt the supply of illegal commodities by targeting the high-level suppliers and key facilitators identified through intelligence-led policing.
“The accused are involved in the distribution of cocaine, methamphetamine and illegal cannabis on a wholesale level and have significantly compromised public safety in Eastern Ontario and parts of Québec. These high-level targets involved individuals associated to criminal networks in Ontario, including Outlaw Motorcycle Gangs and Ottawa and Québec-based known criminal organizations responsible for supplying drugs to mid-level traffickers and street gangs,” said an OPP press release.
The following was seized during the investigation: 11.59 kilograms of cocaine, 211 pounds of illegal cannabis and commercial packaging materials, about 40,000 methamphetamine pills, $227,105 in cash, five vehicles, a cocaine press and large quantity of a cutting agent, two long guns, three handguns, a replica firearm and a Taser.