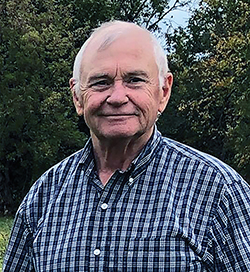 Life-long Litchfield resident Michael McCrank is campaigning for the MRC Pontiac’s warden position and said he’s committed to unifying the region by strengthening ties between all 18 municipalities.
McCrank, who was previously involved in politics as a Litchfield councillor from 1982 to 1990 and mayor from 1993 until 2013, as well as MRC Pontiac’s warden from 2000 to 2013, told the Journal his dissatisfaction with a lack of collaboration within the MRC’s Council of Mayors motivated him to make the jump back into the local political sphere.
“I was really saddened because it seems like the whole county isn’t working together. So, I figured I might as well do something or turn my back,” he explained.
“To be warden, you need [to represent every municipality]. You need to cover every square inch and every person. I question whether [the current warden] has been in that frame of mind,” he added.
McCrank labels himself as an attentive listener and a galvanizing leader who knows what’s best for his community. He believes he’s the perfect fit to help guide the MRC Pontiac to more productive and collaborative ways of doing things.
“A lot of times we sort of give up too fast or early on things. We need to stay the course,” he added.
Emphasizing the need to create more local jobs and improve internet access and cellular service throughout the region, McCrank said one of the main issues facing the Pontiac is its lack of population in comparison to its size.
“We still haven’t been able to modernize our communications,” McCrank said, stressing the need to pressure the federal government to speed up its engagements in bringing Wi-Fi to remote parts of the Pontiac.
McCrank said one of his priorities, if elected, is to meet with MRC employees to encourage them to work with autonomy and creativity to help create new businesses and opportunities. “We have a lot of staff in the MRC and they’re very capable of doing what needs to be done,” he added.
For council meeting matters, he added that he plans to ensure every mayor is well aware of the short and long-term ramifications of files they’re voting on and why they’re choosing certain positions in different contexts.
Pointing to the necessity of implementing a framework to make progress on important projects and initiatives, like Vision2030 and the region’s pandemic economic recovery plan, McCrank intends to communicate directly with each mayor to discuss the state of each municipality, residents’ needs, and how to address them to benefit the whole region.
McCrank supports both the proposed bio-park and energy-from-waste projects as possible solutions to help protect the environment, but stressed the need to adequately consult the population on the matter before going ahead with such a significant undertaking.
“You need to develop a business plan and see if citizens want it,” he concluded.