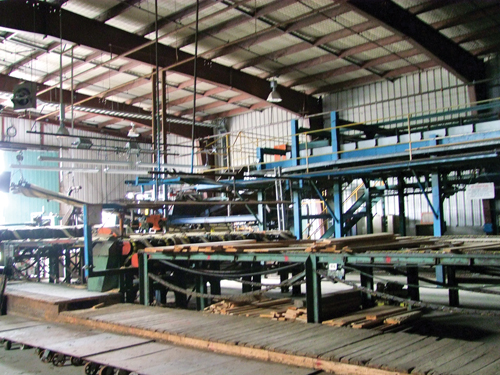 Inside the Davidson mill building.

MANSFIELD – A government consultant will be visiting the Davidson Mill’s site over the next couple of months to conduct an inventory of the equipment and buildings, and to determine what is needed to reopen the mill. The market available for end products will also be explored.
A group of elected officials, Bruno St-Cyr (the main person behind the reopening project) and members of a newly formed cooperative to promote the revival of the mill recently toured the site.
“There are a lot of stories circulating that the mill is run down, outdated or in bad shape, but 95% of the original mill is still in place and the buildings remain sturdy and solid. It’s an automated mill, so it’s [modern], but it will need work to update the electricity,” said MRC Pontiac Warden Jane Toller, who attended the tour.
“It will have to be updated, but the equipment is still there and all the specialists who have come here have said the mill can easily be restored,” said Gilles Dionne, mayor of Mansfield.
Conducting an inventory is one of the final steps in determining if a project can move forward, said Toller.
The mill has been closed for about ten years, but St-Cyr says the site has everything it takes to operate again. The plan is to build a cogeneration plant, Energy Davidson, which would be used as a lever to reopen the mill. Hydro Québec has already confirmed a 25-year renewable contract for the sale of electricity from the 9.5 MW facility should it move forward. Early this year, St-Cyr estimated it would cost between two and five million dollars to get the mill operational again. All together, restarting the mill and building the cogeneration plant will cost about $68 million.
According to St-Cyr, there are enough investors for the project to move forward. He held a meeting with almost twenty investors in March 2020 to update them on the
project’s developments. However the project still doesn’t have a major piece of the puzzle to allow it to move forward: a guarantee of supply or wood allocation from the government. Once this is obtained, operations could begin in as
little as two years, said St-Cyr.
Toller emphasized how the mill presents a solution to a significant problem the region faces in addition to creating jobs and improving the economy. “About 60% of what’s in our forests is pulp and biomass, which this mill would use in conjunction with the cogeneration plant. Davidson has the largest White Pine mill in Ontario and Québec and it deserves to be operated again,” she concluded.
Co-op gathers community support
Coopérative de Solidarité de la Rivière Coulonge was recently created to demonstrate community support and raise funds for a community share in the project. According to Hector Soucie, one of the co-op’s eight current members, the goal is to approach businesses, the MRC, municipalities and individuals to raise $200,000 to contribute to the re-launch. The co-op would become a shareholder in the project and all members would receive a percentage of its profits every year.
However, the co-op is also waiting on the government to issue the mill a guarantee of supply before it begins fundraising. The members are asking municipal and provincial elected officials to put pressure on the Minister of Economy and the Minister of Wildlife, Forests and Parks to issue this guarantee.
“The mill has already provided employment to more than 350 people in our region by manufacturing over 240,000 M3 of wood. The project has everything [needed to launch] with the workforce and investors in place,” concluded the co-op.