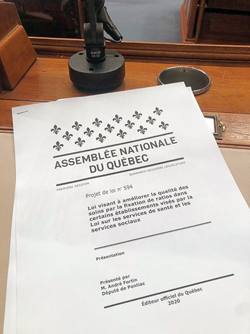 Pontiac MNA André Fortin recently introduced Bill 594 to the National Assembly, which seeks to lower the patient/staff ratio in the province’s hospitals and long-term care facilities.

On May 26, Pontiac MNA André Fortin put forward Bill 594 to the National Assembly, which seeks to lower patient/staff ratios in long-term care facilities and hospitals.
“This means there would be a minimum guaranteed level of service for each patient while also ensuring nurses and orderlies can offer the level of care they want to their patients,” said Fortin. “It’s a model that has proven its worth in other jurisdictions. It guarantees quality care, while providing safe and attractive work conditions for healthcare professionals,” he added.
Fortin said he has been working on the bill for a while and it stems from an agreement the government made with the nurses’ union in 2018 regarding implementing such ratios. “The first step was to test possible ratios at various healthcare establishments across the province. This exercise was completed last year with great results. In long-term care establishments, residents reported less falls and a lower use of medication. In all settings, staff reported lower absentee rates and higher job satisfaction rates. However, the CAQ government has yet to agree to implement such ratios,” he told the Journal.
Members of the Confédération des syndicats nationaux (CSN) health services union protested outside of the Pontiac Community Hospital, June 8, against the reduction of their vacation time to two weeks due to COVID pandemic (partly because of understaffing). Other protests were held in Gatineau the week before as well as other regions of the province.
When asked if it’s realistically possible to reduce patient/staff ratios with staffing shortages already a problem, Fortin said it’s a “chicken or the egg” matter and the bill could boost recruitment. “Without guarantees that working conditions in Québec will improve, which this bill addresses, recruitment will remain difficult. This is why nurses have put improved ratios at the heart of the ongoing negotiations with the government. This bill will contribute to making healthcare professions more attractive and in turn reduce staff shortage problems and ongoing problems in the healthcare system,” he explained.
From here, the government decides whether opposition bills are called or not, and Fortin doesn’t know what to expect. “The CAQ’s position has been hard to grasp, with the Labour Minister saying he was in favour, the Seniors’ Minister saying she was ‘not against it’, and the Health Minister seemingly finding reasons to refuse my proposal. We will see if and when the government choses to call it,” he concluded.