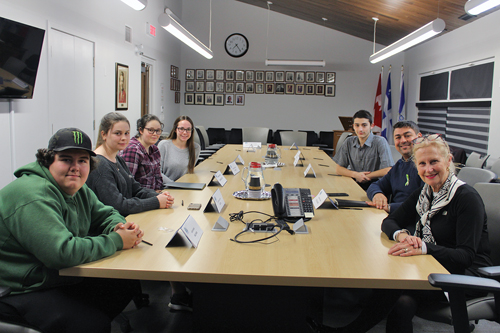 LITCHFIELD – The MRC Pontiac’s second cohort of Youth Council members held its first meeting February 17, in the Elsie Gibbons Room at MRC headquarters. Although the Council currently has 12 members, only five attended due to illness and other commitments.
New this year, the MRC teamed up with Carrefour Jeunesse-Emploi du Pontiac and Karim El Kerch, youth project coordinator, will sit on the Council as an
advisor and help with translation so the meetings can be bilingual.
Warden Jane Toller announced a second change. “Last year we had 18 members representing the 18 municipalities. This year we decided to just involve any youth who are interested,” she explained.
Each of the five attending members were presented with a pin before the room was cleared for the official part of the meeting. The group will meet once a month to discuss issues that are important to youth and the MRC’s Council of Mayors will call on the committee from time to time for input. The Council will appoint executive members at the next meeting. Last year’s Council pinpointed a variety of
priorities including better cell phone and internet service, more recreational facilities, transportation services, and more mental health services.
This year’s members and the municipalities they represent are: Victoria Vickers – L’Isle-aux-Allumettes (second term); Miguel Rivet – Litchfield; Haillee Hamelin Dorzek – Bristol; Madison Park Moorhead – Litchfield; Madison Pilon – Litchfield; Grace Sally – Clarendon; Jacob Chénier – Waltham; Cédrick Morrissette – Mansfield; Myriame Landry – Campbell’s Bay (second term); Alexandria Ladouceur – Mansfield et Fort-Coulonge; Pénéloppe Pomminville – Ile-du-Grand-Calumet; and Sébastien McComeau – Fort-Coulonge.
“We would really like the group to grow to have 18 members, so anyone who is interested can contact me because there’s still room for six more members,” concluded Toller, who was the driving force behind the creation of the Youth Council last year.