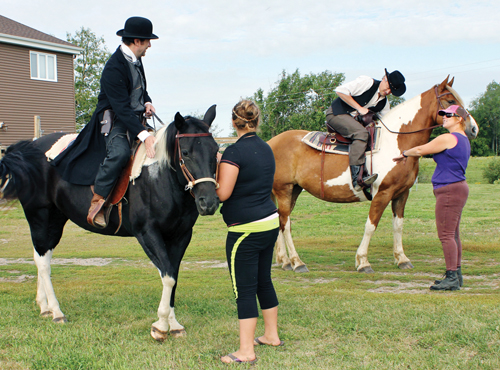 CLARENDON – “Action!” shouts the director. The camera rolls as a horse and rider come into the viewfinder. The pair stop, and the rider stealthily pulls out his gun and dismounts. “Cut!” shouts the director. “Perfect. Now, once more.”
On August 25, GELAM Riding Stables on Highway 148 was turned into a western location for scenes being filmed through Lionsgate, North America’s most commercially successful independent film distribution company. “I’m super excited,” said Ginger Finan, who runs the Stables. “A former rider student contacted me to see if some of my horses could be used in filming ‘The Hunt For Johnny Ringo’.”
“It’s based on a real character,” said the director Brett Kelly, who has 24 feature films to his name, which he believes is a record in Canadian productions. Johnny Ringo was an American outlaw of the 1880s, noted for his deadly fast draw; the ‘good guy’ in the movie is Old West figure, William “Bat” Masterson.
Locations in Embrun and Newcastle, ON, have already been shot. “The riding shots today will be cut in with the rest; one shot will be in Shawville and the next is from Embrun,” laughed Kelly on the liberties taken in creating movies.
Three scenes were done on GELAM property on Sunday. One involved a line of dialogue for use near the end of the movie along with an assortment of shots filmed of the riders on the horses. Finan (far right in right photo) gave a rundown on her horses for the actors, Lawerence Evenchick and Peter Whittaker, to at least give an illusion they know how to ride a horse.
“We have six days to shoot 84 minutes,” continued Kelly. “A Hollywood-produced movie would probably take two months. We have it down to a science.” This particular film involves a staff from Ottawa, including Jennifer Mulligan who has Pontiac roots (left in bottom photo).
Finan’s love of horses stemmed from riding lessons and working with the late Cathy Lapointe of Thorne, where Finan met the fellow rider who made the filming connection. Finan started her own riding stables in 2011 where she conducts about 30 lessons a week, May through October. According to Finan, her students come from the Pontiac as well as from England, France, Gatineau and Kazabazua. They can choose between or learn both: Western saddle, which involves roping and penning, and English saddle, which leads to jumping hurdles.
“I was pleased with how the morning turned out,” said Finan of the filming. “It was just a ‘why not?’ experience. A once in a lifetime opportunity to be able to see my name in the rolling credits of a film!”
The Hunt For Johnny Ringo is scheduled for release this winter or next spring on DVD and likely Video on Demand and Netflix.