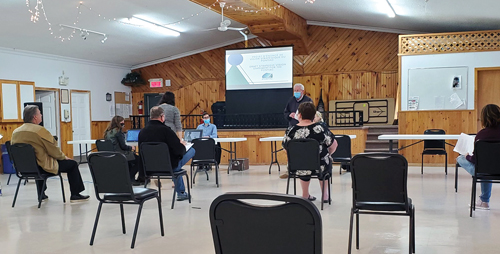 MRC PONTIAC – The MRC Pontiac began its series of ten public consultations on the draft version of the 2020-2030 Strategic Vision on September 14 at
the Raymond Johnston Community Centre in Otter Lake. About a dozen people attended – mostly seniors.
Alexandre Savoie-Perron, MRC Pontiac land planner, with help from Brian Adam from L’Isle-aux-Allumettes presented the plan followed by questions and discussion. Attendees spoke about the challenges the Pontiac faces and what actions should be prioritized in the coming years.
Other consultations took place in Ile-du-Grand-Calumet on September 17, Campbell’s Bay on September 19, Bristol on September 21 and L’Isle-aux-Allumettes on September 22. More consultations will be held in five other communities, ending in Rapides-des-Joachims on October 6; some simultaneously broadcasted on Facebook.
The MRC Pontiac launched the Vision2030 planning initiative in January 2019 and adopted the draft version during the monthly Council of Mayors meeting on February 19, 2020. The final version of Vision2030 was supposed to be adopted in June, but the public consultations planned for March had to be postponed because of the COVID pandemic, so the revised date for the final version is expected to be spring 2021.
Toller stressed it’s an inclusive process. “We’ve organized the public consultations to make sure [Vision2030] doesn’t just include the visions and ideas of MRC employees and their partner organizations. We want to know where all of the Pontiac’s people want the region to be in ten years.”
The draft document identifies nine themes and addresses the present situation, the future if nothing is done, how we want to develop and how to achieve identified goals.