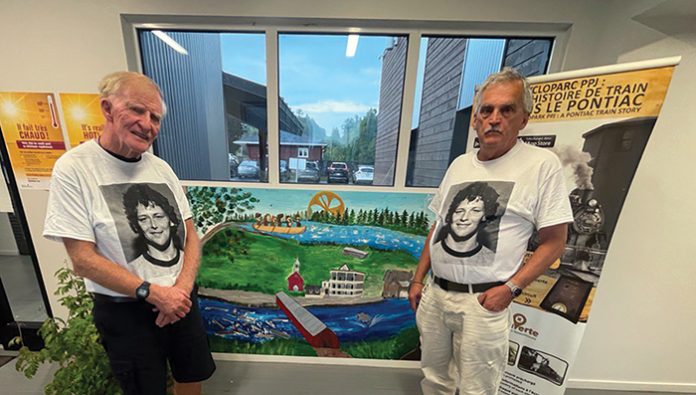 John Petty and Rick Valin, organizers of the annual Terry Fox Run, told mayors about the event at their August meeting.

MRC PONTIAC – After a break in July, the MRC Pontiac Council of Mayors (COM) met on Wednesday, August 17, in the Elsie Gibbons room at the MRC offices.

During the TNO portion of the meeting, a resolution was passed for the authorization of resort leases around Clair and Brock Lakes. Based on recent analysis, both lakes have high potential for this type of development.
Terry Fox run, September 18

John Petty, one of the organizers of the Terry Fox Run, announced it will return to Shawville, on September 18; he invited everyone to participate. He spoke about the importance of the annual event and the need to bridge the gap between the children of today and those who were contemporaries of Terry Fox. “The most important thing is seeing people and keeping this event going.” Visit TerryFox.org for more information, to register, and/or to donate.

A resolution was passed to authorize Director General, Bernard Roy, to sign and submit an application for the “sustainable development strategy” of the “Regions and Rurality Fund” (FRR). There are two funding streams currently available for projects; deadlines are September 16 and 20; applicants must meet with a development officer before submitting their proposal. (See page 8 for more details.)

The RénoRégion program from the Société d’habitation du Québec had new standards adopted by the government on June 29, 2022, and will be in effect until March 31, 2025. The MRC has received approximately $260,000 for low and moderate income homeowners to correct major deficiencies in their homes. Warden Toller encouraged all residents eligible to submit their applications.

MRC Pontiac has allocating $30,000 to an artist’s map project. After a meeting on July 7 between the MRC and Ministère de la Culture et des Communication, it was decided the surplus from the previous cultural agreement will be spent before the end of the year on this project. The aim is to relaunch the Pontiac Artists Studio Tour, with the idea of having the artists open their private studios to visitors over 3 consecutive days.

A sectoral agreement on housing has been proposed by the Minister of Municipal Affairs and Housing (MAMH). A committee will meet in mid-August to
discuss the details of the agreement. The general objective of the new project is to ensure a local housing offer that is sufficient, diversified and affordable. The Journal will provide more details in the next issue.

Considering the importance of arenas for the Pontiac region, and elsewhere in Quebec, and the high expense of electricity in these complexes the MRC resolved to ask Hydro Quebec to establish preferential rates for arenas in Quebec.

It was also resolved that the Municipality of Campbell’s Bay could install an electric vehicle charging station at some point on the Cycloparc PPJ near the park.