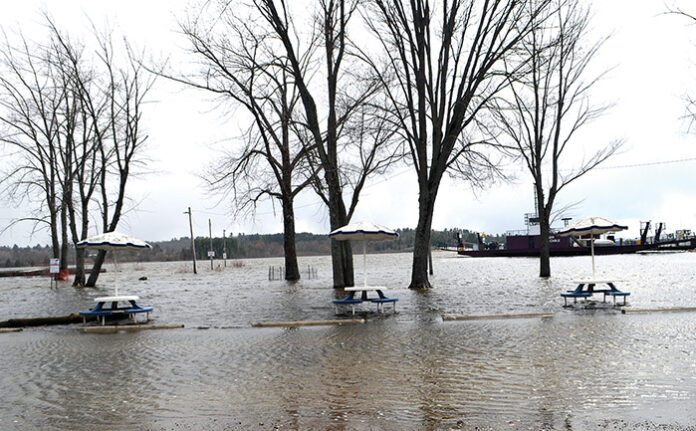 MRC PONTIAC – After the destructive flood of 2019 when people all over the province were severely affected by heavy water flow, the MRC Pontiac established a Flood Prevention Task Force in 2020 to look into and follow the issue of flooding in the area. Many Pontiac municipalities were hit hard by the flood, with over 200 houses damaged in Mansfield alone.

Jane Toller, MRC Pontiac warden, said council was concerned flooding complications were bound to
arise again and decided the best preventative solution was to organize a team
of individuals prepared to tackle the predicament. “This committee was formed to address the problem and be proactive to ensure it doesn’t happen again,” she told the Journal.

The Task Force is made up of members of the Ottawa River Planning Board (ORPB), Hydro Quebec, Ontario Power Generation, Public Security, MRC staff and several municipal mayors, among others. They meet monthly from November until April. Toller said the Task Force is a watchdog; the eyes and ears of the community.

The amount of water flowing into the Ottawa River depends on a variety of factors, specifically
climate conditions, precipitations and drainage circumstances. Snow and ice melt in the spring, and rainfall usually increases. Until the ground thaws completely and the soil is able to absorb the heavy water flow, flooding occurs. The first flood peak usually occurs in mid-April, with a second about three weeks later. The first peak derives from unregulated flows from tributaries and runoff while the second is partially regulated, occurring due to high flows from northern tributaries, headwater areas and reservoirs.

According to Michael Sarich, senior water resources engineer, the ORPB ensures integrated management of the thirteen principal reservoirs of the Ottawa River basin, minimizing flood and drought impacts along the river and its tributaries, while supporting favourable water uses in the basin. Operators of the reservoirs work together to optimize storage to minimize downstream flooding. The Board estimates a land area twice the size of New Brunswick drains to the Ottawa River.

“As an example, assuming that 50 mm of rainfall were received over much of the watershed and half ran off to the river, this would represent an additional volume of 3,650 million cubic metres of water. That’s more water than needed to fill 1,000,000 olympic-sized swimming pools,” said Sarich.

Although the ORPB said it’s difficult to predict spring conditions this far in advance, conditions will be fairly stable over the coming weeks heading into spring.

Toller told the Journal that while only a portion of the flooding can be controlled as the rest is up
to nature, she’s confident Pontiac residents will not have to endure excessive flooding this year as everything is on track. There hasn’t been an overabundant amount of snow in 2022, a good sign for the season ahead, and mitigation efforts are in place.

The Task Force will be corroborating that the reservoirs are lowered as much as possible so they are empty enough to accept runoff, they will be continuously monitoring water levels, and will work towards solutions to keep residents of the Pontiac, and their homes, safe, concluded Toller.