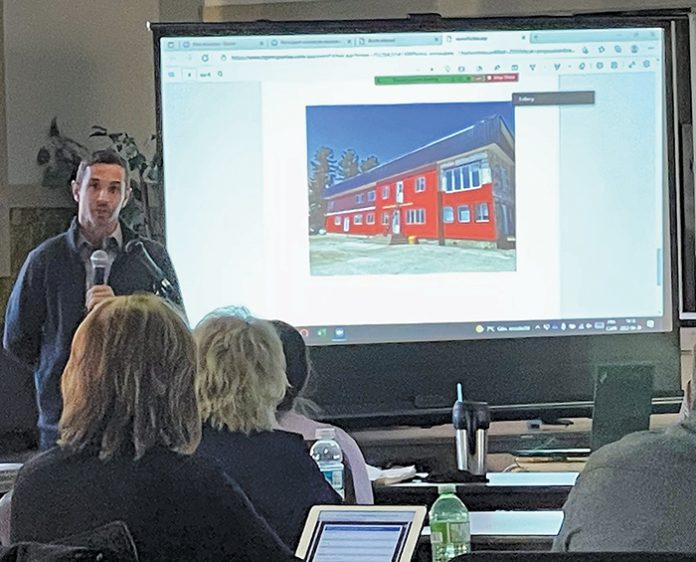 Larry Charbonneau presented his renovation projects to the mayors.

MRC Pontiac’s monthly TNO and MRC Council of Mayors meetings were held on April 20. There was animated discussion regarding Meilleur Residence of Upper Pontiac and the case of the $30,000 accounting error (see page 18) but only after all in attendance paid tribute to Cletus Ferrigan, who passed away on April 14, 2022, after short battle cancer (see page 21).

A presentation was made to the mayors by Larry Charbonneau; he and his brother Benjamin, originally from Sudbury, Ontario, have been buying up and renovating old buildings, such as the Hôtel Davidson, to convert them into apartments to create affordable housing in the region. In the Hôtel Davidson alone, the Charbonneau brothers built 8 new housing units. Larry presented other projects they’ve been working on including the old Pearson building in Fort-Coulonge.

Council also received the financial statements and auditor’s report for the 2021-22 fiscal year. Auditor Simon Thibault from Axè CPA Inc. concluded that the results were “favourable and there was no evidence of fraud” or suspicious activity.

Council approved a motion allowing its members sitting on the board of Connexion Fibre Picanoc to take steps to begin the liquidation of the network’s assets. The operating cost of the network had been rising since the government’s commitment to bring high speed internet to 99% of Quebecers. Connexion Fibre Picanoc has been deemed unsustainable in the long term, as costs were projected to grow.

In response to concerns from the residents of L’Île-aux-Allumettes about the threat of flooding, Warden Toller explained that even though they had recently received reassuring information, everyone should remain vigilant. She stated, “If any of the mayors see anything in particular, they are worried about with flooding, please contact me as soon as possible. We are well below where we were in 2019 at this point. But we know we still have rain that will come and there’s still snow up by Lac Nilgo that has not melted. However, most of the reservoirs are not full yet and they have Bryson and Rocher-Fendu dams full open.”

Several resolutions were passed including a call for tenders to renew group insurance plans for employees; authorizing the sale of 8 properties for taxes; allowing a lease for a resort on Brock and Clear Lakes in the TNO; expanding the MRC’s culture committee to meet standards set by the province; and to sign a contract to resurface a portion of the Cycloparc PPJ between Campbell’s Bay and Mansfield, among others.