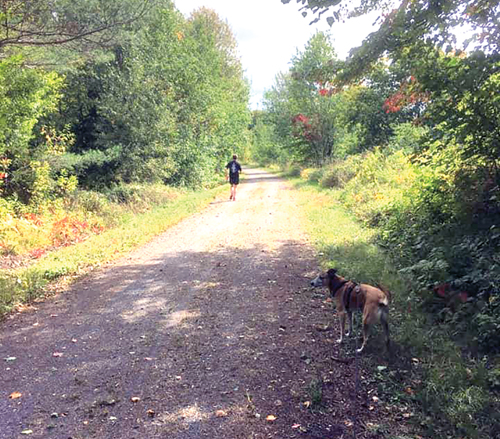 The MRC Pontiac is hoping to obtain $450,000 in provincial funding to ditch and re-surface the PPJ between Shawville and Campbell’s Bay after determining that paving is beyond its means.

MRC PONTIAC – The MRC Pontiac has submitted an application for $450,000 through the provincial government’s Financial Assistance Program for Recreational and Sports Infrastructures (PAFIRS – EBI) to ditch and resurface the PPJ trail with stone dust between Shawville and Campbell’s Bay. The deadline to apply was February 21.
The PAFIRS would cover up to 66.67% of the cost and the MRC will either have to cover the difference or a minimum of 20% if it can obtain other grants. Kim Lesage, MRC engineer, says the MRC plans to apply for other grants to reduce their contribution as much as possible. If approved, the work will be done over two years and be paid for using funds from the MRC’s annual budget for the PPJ, which is usually around $250,000, which includes the 50% contribution from Route Verte.
In November 2019, the mayors agreed to apply for PAFIRS funding to pave the entire PPJ, but at the time were under the impression they could apply for other grants to cover the full 100% of the cost of the work.
Lesage estimated the cost of paving the entire length of the PPJ would be roughly $6 million, including the ditching and addition of granular material required for the work, meaning, the MRC would have had to kick in around $1.2 million.
“When we learned the terms and conditions of the program and that the MRC would have to cover a minimum of 20%, we came up with another plan to suit the current vision and budget for the PPJ. This work would continue the improvements done the past couple of years between Bristol and Shawville, and would [leave us with a balance from] this year’s budget for improvements in other sections of the trail,” explained Lesage.
Other plans this year
Now that the MRC has replaced all of the culverts in critical condition along the PPJ, this year it will focus on ditching and resurfacing in areas needing it most. Lesage will inspect the trail in the spring to decide on which areas to concentrate.
The MRC has not heard from the Ministry of Transport about whether it will allow the unused funds from last year’s Route Verte grant to be carried over to this year. The application process was delayed and the funding from Route Verte was only approved in January 2020, so the MRC didn’t make use of the entire $125,000 budgeted in 2019. They spent only $71,600 on the trail, which was matched by Route Verte; the remaining $53,400 was likely put into surplus.