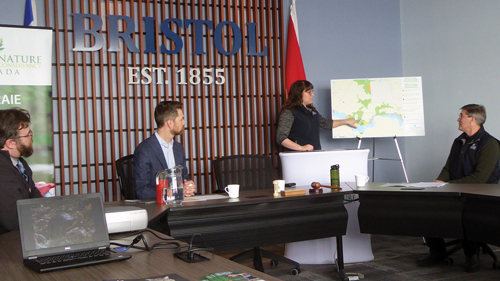 Caroline Gagné points to the NCC’s most recently purchased property at a press conference and gathering at the Bristol Municipal Hall, February 15. At the table starting from left, Councillor Greg Graham, Federal MP Will Amos and Joël Bonin, NCC Quebec associate vice-president.

BRISTOL – The Nature Conservancy of Canada (NCC) celebrated their most recent land acquisition in Bristol, a 789 acre forest and wetland property in the Knox Landing area near the Ottawa River. A press conference at the Bristol Town Hall and site visit was held February 15.
The new property is part of the Great Bristol Marsh where the Nature Conservancy already protects more than 2,718 acres. The area is also home to Quebec’s largest population of Blanding’s turtle, a species designated threatened under the Quebec Act Respecting Threatened or Vulnerable Species and endangered under Canada’s Species at Risk Act. Numerous other threatened species live there as well.
The land purchase was made possible through the financial contributions of the provincial and federal governments, as well as the U.S. Fish and Wildlife Service, through the North American Wetlands Conservation Act.
“The Pontiac region is very interesting,” said Joël Bonin, NCC Quebec associate vice-president, recalling that he first came to Bristol 30 years ago when eastern musk turtles were discovered in the area. Ten years later, another endangered species, the eastern ribbon snake was discovered in Bristol.
Caroline Gagné, Western Quebec program director, underlined the importance of including the area in an ecological corridor extending from the Ottawa River to Gatineau Park. An ecological corridor is a land or water passage linking landscapes together, allowing wildlife to move and plants to disperse. Conserving interconnected forests and wetlands is vital to the survival of species which require large wilderness areas for feeding and breeding.
“Budgets matter,” emphasized Pontiac MP Will Amos, who said he worked hard on the 2018 federal budget to ensure funding would be available for conservation projects such as the one in Bristol.
“We appreciate working with the Nature Conservancy and its partners,” said Bristol Councillor Greg Graham, noting that funding from programs for species at risk paid for road improvements in the Bristol Marsh area. “Part of the area is a former industrial site and the big plan a number of years ago was to make it a mega-dump. Fortunately, it’s now being recognized for other values,” he added.
The press conference was followed by an outing to Knox Landing Road. Participants hiked to one of the road improvement sites Graham mentioned and
biologist Jean Fink, from the Centre d’enseignement et de recherche en foresterie (CERFO), explained, among other things, non-lethal methods to manage beaver activity.