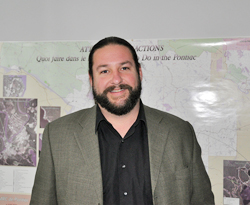 Jason Durand, the MRC Pontiac’s new director of territory, has always loved the outdoors and his experiences in the wilderness sparked his love for the forest and helped him prepare for his responsibilities as director. With years of experience hunting and fishing in the Pontiac’s forests, Durand is familiar with the area’s wilderness and road network.
His experiences and knowledge of the territory’s issues were factors that motivated him to apply for the position after Regent Dugas retired.
Durand originates from Aylmer but has lived in Mansfield for the past 19 years. He and his partner have two children. In 1998, he graduated from the forestry studies
program at Cité Collegial in Ottawa. This was followed by a stint with ZEC Saint Patrice where he gained valuable experience in forest management. In 2006, he graduated with a Forestry Engineering degree from the University of Moncton. His work experience includes time with Quebec’s Ministry of Forests, Wildlife and Parks, and from 2007 to 2016, he worked with Groupement Forestier Pontiac and Resolute Forest Products.
Durand hopes to help the Pontiac and its people get a bigger slice of the economic pie. He understands this will take years, as his first priority is to come up to speed on the numerous files that will come across his desk (ex: leases, inter-municipal public lands, waste management, etc.). The territory has a huge geographical expanse and maintaining strategic roads and bridges is also a high
priority, he said.
“We are happy to welcome Jason to the MRC. He is thoroughly familiar with our territory and brings first-hand knowledge to his work,” said Jane Toller, MRC Pontiac warden.