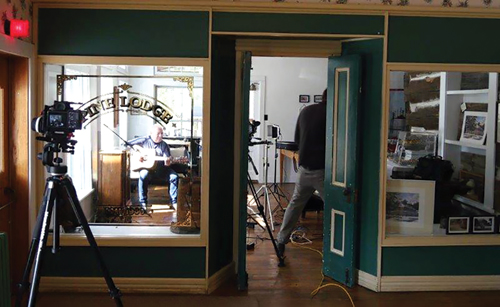 The filming of Bob Webb’s performance at Pine Lodge in Bristol for the Outaouais Live TV series.

PONTIAC – A new TV series dedicated to the arts in West Quebec, Outaouais Live, premiered on Videotron’s MAtv the week of May 24. 100 Mile Arts Network
produced the series and Regional Association of West Quebecers (RAWQ) is the Executive Producer.
The 12-episode, English-language, arts-magazine-format series from
various locations throughout rural Outaouais showcases musicians, artists of various practice, galleries, and cultural and performance spaces.
Claire Bestland, an Outaouais musician and composer, hosts each
30-minute episode where one musician or musical act will be highlighted,
opening and closing the show – in between, other artists will be
interviewed in their home studios, galleries, or cultural spaces.
Bob Webb, a musician who has ties to the Pontiac, opens and closes one episode of the series, which also features Pine Lodge, Valerie Bridgeman at ArtPontiac, artist Katharine Fletcher, and the Little Red Wagon Winery.
Each video can also be viewed online at https://en.matv.ca/outaouais/
schedule.