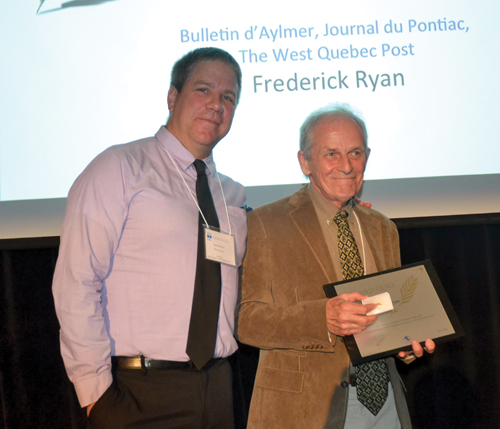 The 2016 provincial community newspaper awards were announced June 3 in Montreal; the Pontiac Journal had its best-ever year with multiple awards, and was named one of the top three newspapers in the entire province for 2015.

The 2016 provincial community newspaper awards were announced June 3 in Montreal; the Pontiac Journal had its best-ever year with multiple awards, and was named one of the top three newspapers in the entire province for 2015.
The Journal’s sister papers, the West Quebec Post and Bulletin d’Aylmer, also did well.  The ceremony saw awards presented for the best in 36 categories of journalism, photo-journalism, advertising design, layout, and “general excellence”.
Among the Journal’s most notable awards was a rare double recognition to editor  Allyson Beauregard who won a first place for Best Editorial (General topic) and third in Best Editorial for local affairs; former French editor Arnaud de la Salle won a second for Best French-language Editorial; and designer Jess Clouthier
won the gold for his cartoon on the OLF harassment of the Journal’s bilingual
coverage.
The Journal also won first for Best Community Newspaper Promotion (Readers’ Choice awards), a third for Best Special Section (on Remembrance Day), a third for Best Photo Essay (Shawville Fair), and second for Best Editorial Page.
Lynne Lavery, the Journal’s general manager summed up the many awards received by the paper:  “The writing awards and cartoon were a solid recognition of the quality of the work done by our editors and design department, as was the 3rd place for Best Overall Newspaper; the judge’s comments for this one called us a ‘tough little paper’. I loved that!
“For me, though, the most important award was for the Best Community Newspaper Promotion, because it included work by everyone at the paper: our sales staff, design staff and editorial staff. This was our Readers’ Choice special section and saluted not only the Journal, but all the local businesses recognized
in it.”
The Bulletin d’Aylmer’s chief reporter and Journal contributor, Laurent Robillard-Cardinal won a first place for the Best French-Language News Story, with silver medals for Best Arts & Entertainment Story, Best Environment Story, and for Best Editorial (local affairs).
Columnist and translator Carolle Bertrand took the gold for the Best French-Language Column in 2015, “Clic d’oeil de la vie”, on her family’s part in sturgeon
fishery on the Ottawa River.
Journal founder Fred Ryan was presented with the Canadian Community Newspapers Gold Quill award, which recognizes 50 years in the newspaper
industry; he is the only newspaper person in the Outaouais to have received this
prestigious recognition.