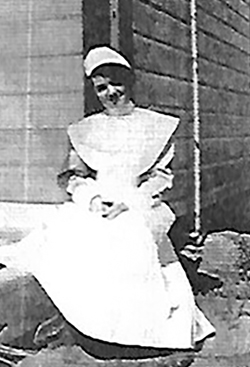 SHEENBORO/TIMMINS – Two communities over 600 km apart are coming together during the COVID-19 pandemic to honour a Sheenboro native, (Elizabeth) Laura Keon, who volunteered her nursing services in Timmins during the 1918 Spanish flu pandemic, and unfortunately fell ill and succumbed to it herself.
The Journal caught up with Timmins’ historian and columnist Diane Armstrong, who has advocated for the city of Timmins to follow through on the intentions of Town Council as published in the Porcupine Advance on December 4, 1918: “On December 2, 1918, at the Timmins Town Council meeting, Council endorsed the plan for erecting a suitable memorial here to the late Miss Laura Keon, who gave such devoted service as a nurse here in the early and trying days of the epidemic, and who in the end gave her life as a result of her self-sacrifice for others.” It was resolved that the Treasurer be authorized to spend no more than $300 to erect a memorial to the late Keon.
Armstrong noted that in her 12 years’ research of this matter, including combing through municipal meeting minutes, newspapers and other historic documents, she could not find any evidence that the $300 was spent, which she noted would be the equivalent of over $5,000 today.
As a member of the Timmins museum, Armstrong said, “I’ve always had a deep interest in the life of my community. A fellow member, Norah Lake, had found the first mention of Laura Keon in the pages of the Porcupine Advance newspapers of 1918 and she tried to follow up by writing letters to people in Sheenboro asking for details, photos, etc. Norah passed on the file to me, for my interest.”
So Armstrong advised Timmins’ Mayor, George Pirie about the original promise, and she said, “He agreed that it was 103 years late, but it was time to “right the wrong” and approve a memorial.” Discussions about what form the memorial will take, where it will be installed and what will be involved will take place in the coming weeks.
E. Laura Keon
One of 13 children born to Matthias Keon and Margaret Slattery in Sheenboro, Keon arrived on August 19, 1893. Her great-niece Lynn Keon explained the connection to Timmins: “I believe the cousin she went to visit in Timmins was [her first cousin] Jennie Burke.”
Armstrong said local papers noted Keon arrived in Timmins in August 1918, and liked the area so much that she secured her own apartment and intended to work as a nurse.
“At that time, Timmins had one, 10-bed hospital, owned by the Hollinger Mine. It is assumed Laura worked there until the Spanish Influenza epidemic struck the area. Dr. H.H. Moore (one of four doctors in the area) asked for volunteers to work in an emergency hospital and Laura was the first to volunteer,” explained Armstrong, further clarifying that emergency, temporary hospitals were located in hastily-vacated schools, and Keon was appointed to be the nurse in charge of all other nurses in Timmins.
Records show she contracted the flu and died on November 4, 1918. She was buried in Sheenboro on November 7, 1918.
It seems Keon made a strong impression on the local community, as Armstrong quoted the November 6, 1918 edition of the Porcupine Advance: “Miss Keon was dressed in death in her gown as a nurse, the uniform she had graced in life and in which she had been such helpful and self-sacrificing service to others….a group of local nurses, led by Mrs. Lawlor, preceded the cortege in their nurses’ uniforms and carried a large silk British flag, kindly loaned by Leo Mascioli as they made their way to the train station.”
Armstrong said no other records exist of healthcare providers perishing from the Spanish flu in Timmins, suggesting Keon may have been the only health care provider to die from the disease.
Honouring Keon
Both Armstrong and family member Lynn Keon have strong feelings about commemorating Keon’s service. Armstrong has been working on this initiative for 12 years, and notes that Timmins has erected memorials to various miners. Now with the current pandemic, the importance of health care workers and the risks they regularly take has reinforced the importance of recognizing a woman who lost her life in the service of providing care to others. Erecting this memorial is on Armstrong’s “bucket list.”
“I’m not sure I can adequately express what it would mean to me (and other family members) [for this memorial to be erected]…As a front line healthcare worker myself, (I’m a pharmacist) currently working in a pandemic, I would feel very proud and grateful to have Laura honoured for her work. Laura is one of the first recorded in our family history to have demonstrated such a great passion for her profession,” said Lynn Keon.
Keon had/has many relatives who are also frontline healthcare workers, including her niece Jean Keon (Adam) who was a nurse for many years at the Chapeau and Pembroke hospitals as well as her nephews Dr. Wilbert Keon and Dr. Harold Keon.