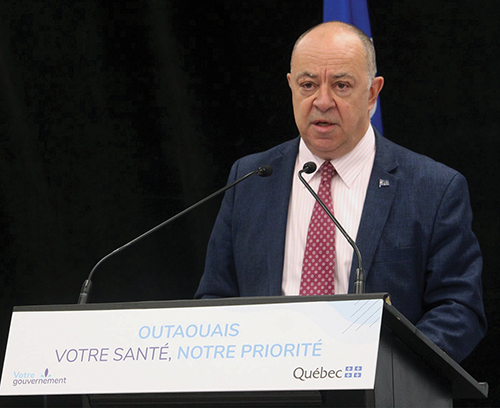 The Quebec government has postponed its initial decision to suspend the province’s inadequately vaccinated health professionals by a month to minimize the impacts on the health system, services and population.

OUTAOUAIS – The Quebec government has postponed its initial decision to suspend the province’s inadequately vaccinated health professionals without pay by a month in an effort to minimize the impacts of COVID on the health system and population amid critical staff shortages.
During a press conference on October 13, Christian Dubé, Quebec Minister of Health and Social Services, said inadequately vaccinated health workers now have until November 15 to get immunized – instead of October 15. This followed a press conference the day before (Oct 12) where Dubé declared the government had no intention of pushing the initial deadline.
Dubé said the risks are too high at this time and would apply too much pressure on the province’s already short-staffed system. “It would irresponsible to [gamble] with the health of Quebecers,” he said.
“There’s no perfect solution. I know this decision is frustrating for health workers who are already vaccinated … and for users of the system who want a safe environment. We want mandatory vaccination for health workers, but not at the expense of risking our ability to care for citizens.”
Non-immunized health workers in public and private facilities will undergo at least three COVID screening tests per week until the deadline kicks in. They also won’t be eligible to receive recently announced bonuses and premiums. All new hires must provide proof of double-vaccination.
“Obligatory vaccination … is the right decision,” Dubé said. “But we are realistic … it’s primordial for us to protect our system and clientele,” said Dubé.
Dubé noted that, even if single-dosed employees could remain in practice, the province would still have lost between 12,000 and 14,000 workers with the initial deadline.
In the Outaouais as of October 11, 758 health employees remained inadequately vaccinated – 519 received zero doses and 239 one dose – compared to 22,446 province-wide.
The Journal contacted
the Centre intégré de santé et des services sociaux de l’Outaouais (CISSSO) to find out the number of unvaccinated employees working in the Pontiac’s facilities, but didn’t receive a response in time for print.
It’s not enough, says MNA
Following Dubé’s press appearance on October 12, Pontiac MNA André Fortin said he was disappointed that the provincial government presented no concrete contingency plan to address the potential impacts of
the mandatory vaccination deadline.
“I expected some data,” he added. “I expected him to tell us what services would be closed and how they intend to open them over the short, medium and long term.”
The Pontiac Community Hospital (PCH) remains severely understaffed; its obstetrics unit has been closed for over a year. Fortin said the vaccination deadline would have caused more essential services to shut down. “It means a closure of services. We can play with words how we want … but the reality stays the same,” he said.
Fortin added that the provincial government needs to do more to keep and attract more health professionals to work in Quebec rather than Ontario – where salaries and working conditions are generally better – than simply providing one-time bonuses.
“I’m requesting a more substantial, permanent, and urgent plan for contingency,” Fortin concluded.
A local perspective
Gilbert D’Aoust, PCH administrative coordinator, said he has been working to mitigate the impacts of potentially losing employees who aren’t yet vaccinated. He couldn’t clarify the number facing suspension at the PCH because the situation is evolving.
Noting that the COVID vaccines have proven to be effective so far despite many people still questioning their efficacy and safety, Dr. Thomas O’Neill, a Shawville physician, told the Journal that collective immunization is the right solution to end the pandemic and prevent mortality.
O’Neill said non-vaccinated health workers are putting themselves, their colleagues, and patients at risk, which negatively impacts staffing.
“From the point of view of anti-vaccination, I understand why they would be concerned about their liberty,” O’Neill said. “On the other hand, you have to look at the common good, and it has proven to make a difference. Look at other jurisdictions where they still have a lot of [unvaccinated] people, and they’re basically burning out health professionals. When you look at all of that, I have no problem with the compulsory mandate,” he concluded.