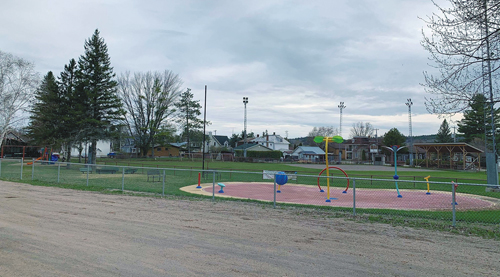 Campbell’s Bay’s downtown park area will be improved again this year with a new play structure and a building with washrooms, change room and water fill station.

CAMPBELL’S BAY – Members of the municipality, local federal and provincial members of parliament and former mayor Cletus Ferrigan gathered via Zoom on April 8 for a press conference announcing funding for the next phase of a series of downtown improvement projects council initiated with the essential support of community volunteers.
The federal government is investing $41,600 in children’s park infrastructure the municipality proposed, matched by the provincial government.
Mayor Maurice Beauregard explained that council’s vision to improve the downtown core and ensure the municipality is family friendly has led to a series of improvements in Campbell’s Bay. A mural was completed in 2015, and after the downtown park vision plan was completed with public consultation in 2016, the improvements kept rolling out: mural park (2017), ball park lighting upgrades (2017 & 2019), new docks (2019) and a splash pad (2020).
As with most government grants, the municipality must provide funds as well (20%), but Beauregard stressed that no funding for this project will come from the budget: it was all raised thanks to the tireless efforts of volunteers and council members, without whom Beauregard said it wouldn’t have been feasible. The last two summer festivals were the largest fundraisers, and the mayor commented that everyone from 8-90 years old helped out, from youth retrieving errant baseballs over the fence, to the senior women of the Red Hat Society.
This year’s work includes installing a building with two washrooms, water fill station and change room, plus a new play structure for 6-12 year olds, a walkway and lighting.
“It will be accessible to people using the PPJ, the splash pad and residents. It will have more than one use, we are proud to say,” Beauregard commented.
Beauregard said the improvement plan doesn’t have a specific timeline; councillors actively seek out grants wherever they can, and submit to relevant projects as they come up, e.g. the recent successful grant for table and chairs in the RA hall.
Pontiac MP William Amos offered a “tip of the hat” to former mayor Cletus Ferrigan, appreciating all of the hard work he has done, saying the development fits into an intergenerational vision developed over many years. Further, he highlighted that the project will help attract families and tourists to the area, while serving the needs of existing residents and the local community.
Québec’s investment is through the Programme d’aide financière aux infrastructures récréatives et sportives (PAFIRS), while Canada’s is through the Community, Culture and Recreation Infrastructure Stream of the Investing in Canada Program.