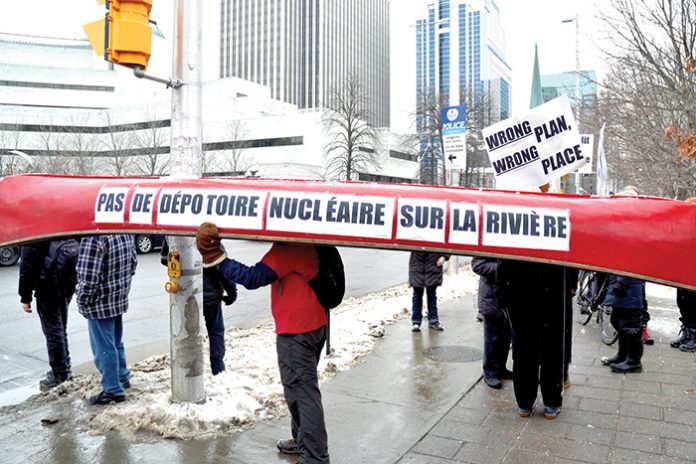 Many protests have taken place since 2017, on Parliament Hill and by boat flotilla on the Ottawa River,
against the proposed nuclear dump at CNL’s Chalk River site. The final public hearings regarding this
proposal will be held in late May with the deadline for registrations on April 11.

CAMPBELL’S BAY – MRC Warden Jane Toller has registered to intervene at the Canadian Nuclear Safety Commission’s (CNSC) hearings regarding the proposed Near Surface Disposal Facility (NSDF) at CNL’s Chalk River site. The facility would be a repository for low and medium nuclear waste materials.

The deadline for the public to register is April 11, with the hearings scheduled for late May. In January, the mayors of the MRC unanimously approved a resolution against the projected dump site. Sandra Armstrong, Mayor of Mansfield-et-Pontefract, moved the motion, and told the Journal that for four years she has been very concerned about this idea of storing nuclear waste along the Ottawa River.

Toller cites numerous reasons for registering as an intervenor, with public health concerns at top of her list.

In an interview with the Journal, Toller said the MRC was never consulted about the prospect of building the dump so close to the Pontiac. “One of our goals at the MRC Pontiac is to protect the lifeblood of our area, our rivers. The Ottawa River is one of those gems to be protected. The Des Moines and Black River are the others. People come to our region because we offer nature, healthy living.

The project at Chalk River threatens all of that.” She is also disappointed that the province of Quebec has yet to declare its half of the Ottawa River a “heritage river” while Ontario has already done so.

Toller also noted that statistics from CISSSO, the local health authority, show the population of the Pontiac already has a higher rate of cancer than other regions. As the protective seals around the nuclear waste degenerate over time, the chance of radioactive waste leaking into the river will increase and cause more serious threats to the public’s health.

Toller is also worried about the trucking of material to Chalk River and the potential of an accident resulting in spillage near a community.

Other politicians to intervene

A portion of the Municipality of Pontiac runs about 35 kilometres alongside the Ottawa River. The NSDF project has raised alarm bells for politicians and citizens alike, and Mayor Roger Larose has registered to intervene. “The village of Quyon gets its drinking water directly from the Ottawa River. The treatment centre will not be able to eliminate radioactive waste from the drinking water,” he stated.

Denise Giroux, Pontiac’s NDP federal candidate in the two last elections, remains very active on the file. In 2019, Giroux participated in the flotilla protest that began at Sheenboro and made its way by boat to the Chalk River site. Giroux has also registered to address the CNSC. Among her concerns is the definition of the waste material projected to go into the dump site. Will it remain low-level as defined by international standards or become medium-level as has been proposed? She is concerned that today’s decision makers will not be around to be held accountable for tomorrow’s possible nuclear disasters. “We have to act now to protect the future safety and economic viability of the Pontiac,” she stated.

Giroux added the health, prosperity, and livelihood of the Pontiac will be threatened if this project moves forward. “The Ottawa River is the source of future wealth for the Pontiac, both in terms of tourism and farming; our elected politicians should be doing everything possible to safeguard the community.”

MNA Andre Fortin released a written statement to the Journal, saying in part: “Chalk River nuclear site has long been a source of concern for many residents…. the Environment Ministry of Quebec has stated that it is satisfied with the project…. It is our duty to protect the quality of the water. Given the importance that the river occupies in our region, I will await to hear all of the proceedings before making a final decision.”

Hundreds of intervenors are expected to speak at the hearings; deadline to register is April 11.