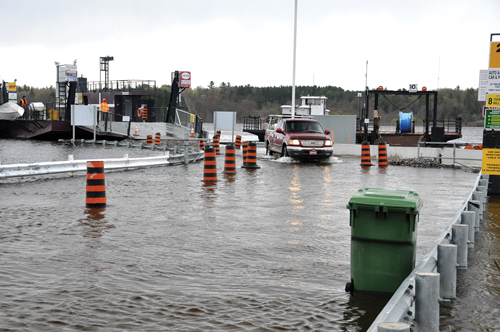 Unlike the 2019 flood, pictured here at the Quyon Ferry, the Municipality of Pontiac was only minimally affected this year.

MUNICIPALITY OF PONTIAC – The provincial government announced on April 23 that 15 municipalities and their citizens are eligible for compensation through the General Program for Compensation and Financial Assistance in the Event of Real or Imminent Disasters as a result of the flooding and rainfall that occurred from March 26 to 31, 2021. The Municipality of Pontiac was among the 15 chosen.
According to Joanne Labadie, Pontiac mayor, the provincial government issues a decree for emergency flood funding on a yearly basis.
“Fortunately, this year was an easy year for the municipality for flooding. There were only two areas that suffered road erosion problems due to heavy rains: Chemin Privé Breckinridge, which the Nature Conservancy of Canada owns and paid for the repairs; and a culvert washout on Chemin Privé des Emeraudes where the private beach association is responsible for the repairs and was provided the
information so they may submit a claim to the Ministry of Public Security (MSP),” she explained.
Labadie noted that although she was in constant communication with the MSP and the municipal coordinator of emergency measures to get help to
the private roads affected, the municipality cannot intervene on private roads.
“It may be for this reason that [the government] included Pontiac in the decree. The municipality won’t be submitting any claims since we didn’t incur any expenses” concluded Labadie.
The program is intended to support municipalities, citizens and businesses that were victims of a disaster, as well as organizations that provided help. It’s a last resort to help repair certain damages to primary residences, businesses and critical municipal infrastructure.