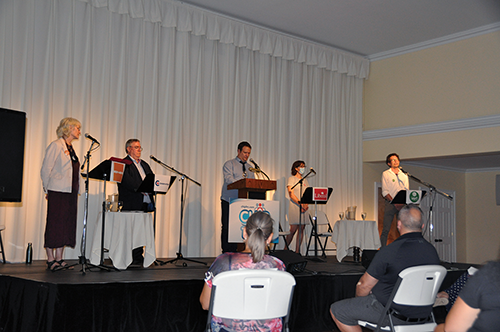 Local representatives from the NDP, Conservative, Liberal and Green parties participated in a debate on August 25.

FORT-COULONGE – Cordial but divergent exchanges took place August 25 during a candidate debate CHIP 101.9 radio organized and broadcasted live via the radio and web. Live from the Conference Centre, four of the Pontiac’s eight candidates participated in the discussions. Liberal Sophie Chatel, Conservative Michel Gauthier, Denise Giroux of the NDP, and Green Party candidate Shaughn McArthur discussed topics related to the economy, the environment and various local issues like Chalk River’s radioactive landfill plan.
Only about 15 guests were able to attend the meeting in person and three members of the public asked questions: Jim Coffey, Sébastien Bonnerot and Louis Harvey. They first asked: “The Pontiac riding
is big. How are you going to make sure it’s well represented?”
Chatel acknowledged the riding’s communities experience very different realities. McArthur pointed out that the region went from being one of the richest places in Québec to one of the poorest. Gauthier described himself as a child of the riding, growing up in Maniwaki and practicing journalism throughout the Outaouais. Giroux emphasized the cultural richness of the riding and its rural realities.
The forest industry received a lot of attention, especially from Gauthier, who said he took note of the issue during a meeting with Pontiac Warden Jane Toller. “I describe the Pontiac’s economy by saying this: your wood goes out of the region to create jobs elsewhere,” he said.
Chatel, on the other hand, pointed out investments the Liberals have made in recent years, including the Québec branché program, which should allow the Pontiac to count on a reliable and exhaustive high-speed internet network in the next few years.
During an exchange on the environment, differences in the Liberal and Conservative platforms
surfaced. Gauthier defended his party’s agenda, while Chatel questioned the Conservatives’ credibility. “The Conservative’s environmental plan isn’t serious,” she claimed.
There was more in common for the NDP and Green Party, leading McArthur to say he would like to see both parties run the country. “We’re in complete agreement on the environment, but we in the NDP have the means to do something about it,” said Giroux.
On the issue of the radioactive landfill project in Chalk River, the three parties other than the Liberals opposed it. Chatel said she will ensure the decision-making process takes into account the safety of Canadians.
The filmed meeting is currently available on CHIP 101.9’s website.