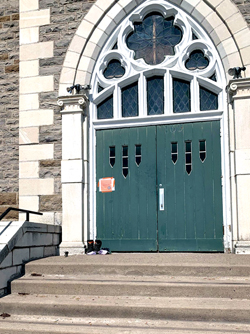 Children’s shoes were placed on the steps of St. John Evangelist Catholic Church in Campbell’s Bay.

MRC PONTIAC ­– The 18 municipalities of the MRC Pontiac lowered their flags to half-mast to honour the 215 children whose remains were recently found at the site of a former residential school in Kamloops, B.C., starting June 1. The initiative also marked the start of National Indigenous History Month and the MRC requested that all municipalities lowered their flags for one hour for each of the children found.
“We honour these children along with the many other Indigenous children who never made it home, the survivors, and their families,” said the MRC in a statement.
The MRC’s Council of Mayors plan to send a resolution to the provincial and federal governments following its sitting on June 16 to show support for the Indigenous peoples of Canada and request that all former residential school sites be thoroughly searched. Council plans to demand that governments
take swift and tangible action to move towards true reconciliation and reparation for the mistreatment of Indigenous communities across Canada.
“We offer our support and comfort to all Indigenous peoples in the Pontiac and across Canada. Please know that we stand with you during this difficult time,” expressed Jane Toller, MRC warden.
People in communities across Canada placed children’s shoes and memorial messages on the steps of Catholic churches as a sign of mourning and to commemorate victims and survivors of the residential school
system, in which the Catholic Church, among others, played a central role.