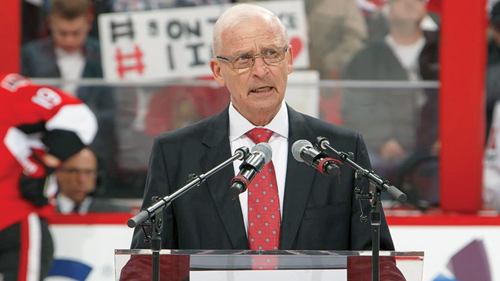 After a battle with colon cancer, former Ottawa Senators General Manager and Shawville native Bryan Murray passed away, August 12, at the age of 74.

After a battle with colon cancer, former Ottawa Senators General Manager and Shawville native Bryan Murray passed away, August 12, at the age of 74.
“Bryan was one of the greatest men that the game of hockey has ever known and also a great father, mentor and teacher,” said Senators owner Eugene Melnyk in a news statement.
Shortly after the Senators’ season end, Murray officially announced his resignation as GM on April 10, 2016, with Assistant GM Pierre Dorion filling his place; Murray took on a senior advisory role.
Murray decided to remain in his role as GM after being diagnosed with Stage 4 colon cancer in November 2014, but he said his health as well as wanting to spend more time with family were some of the reasons for his resignation.
The Senators inducted Murray into the Ring of Honour earlier this year. The 2016-17 season was his 35th consecutive year working in the NHL after coaching for 18 seasons and 1,239 games.
Murray was hired as head coach in 2004 and was promoted to GM three years later after the Senators competed for the Stanley Cup. He leaves behind his wife Geri and daughters Heide and Brittany as well as many brothers and sisters.
A Funeral Service for family and friends will be held in Shawville United Church, 410 Main St., Shawville, Quebec on Tuesday, August 22, 2017 at 1:00 p.m. A  Celebration of Life will be held on Thursday, August 24, 2017 at 1:00 p.m. at Canadian Tire Centre, 1000 Palladium Dr, Ottawa. We encourage family, friends, colleagues and the public to attend to honour Bryan’s legacy. Please enter via the Gate 2 entrance.
Donations can be made to the Make a Wish Foundation, Shawville Recreation Association, DEBRA Canada (in honour of Jonathan Pitre), Jardins Éducatif du Pontiac or a charity of choice.