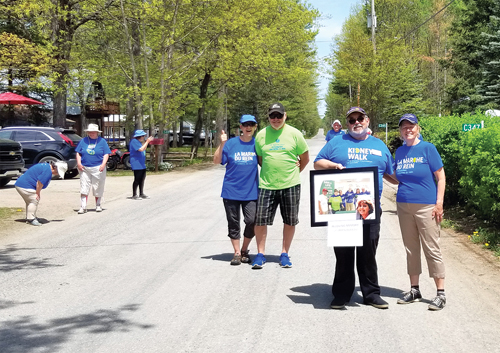 People from across the Pontiac have been out walking “at their own place and time” to raise funds for Kidney Foundation of Canada. Pictured is local walk organizer Randy Russell holding a sign in memory of long-time friend and kidney recipient Laureen Bureau who died earlier this year.

MRC PONTIAC AND PONTIAC – The COVID-19 pandemic didn’t stop the Pontiac Kidney Walk from once again being a huge success as walkers from across the region so far raised over $11,000 for the Kidney Foundation of Canada, placing the event in third place out of 22 provincially in terms of the amount raised. The Pontiac walk is the only one in the province so far to exceed their fundraising goal, which was $10,000.
The second annual walk was supposed to be held May 23, but was cancelled due to COVID restrictions. “I thought, how are we going to salvage this? The walk is the Kidney Foundation’s biggest fundraiser for research, raising awareness about organ donation and helping patients,” said organizer Randy Russell, who reached out to as many people as possible using last year’s donor list to see if they would be interested in participating in a “virtual walk”.
Participants walked alone or in small groups (respecting social distancing
regulations) at their own place and time; many went out on May 23, the same day the event was supposed to be held. Some teams, like Edith and The Sawdust Trail, collected cans and bottles in the ditch to raise additional funds.
“COVID-19 can’t knock the folks in the Pontiac over! It has been a very different experience this year, but the Pontiac’s people never cease to amaze me. Even though everyone is going through their own challenges (anxiety, illness, financial strain, etc.), the Pontiac still came through. I’m so proud to live here,” said Russell, who hopes to have a “grand finale” BBQ to raise additional funds in October.
Russell is a kidney recipient himself and suffers from polycystic kidney disorder, a condition that affected three generations before him as well as his son. “Through five generations, we’ve seen the treatment for the condition improve substantially. My son takes a medication that stops cysts from developing and growing, meaning he likely won’t have to have a transplant like I did. The money raised and spent on research is clearly making a difference,” he concluded