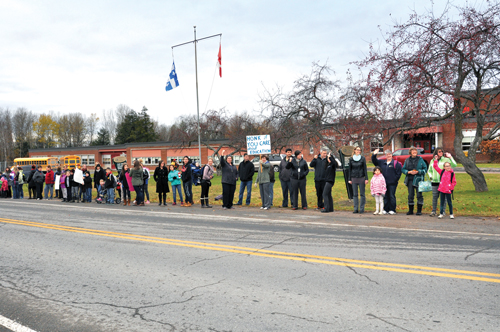 PONTIAC – Thousands of public servants across the province protested a series of governmental cutbacks, November 9 and 10. Included in the strikes were teachers and support staff from various schools across the Pontiac as well as health care workers.
Classes cancelled

PONTIAC – Thousands of public servants across the province protested a series of governmental cutbacks, November 9 and 10. Included in the strikes were teachers and support staff from various schools across the Pontiac as well as health care workers.
Classes cancelled
Due to the Common Front strike, the Western Quebec School Board cancelled classes in all their schools and centres, November 9 and 10. On the same day, more than 130,000 Centrale des
syndicats du Québec (CSQ) union members and their Common Front partners participated in a strike in various regions across Québec, including the Outaouais.
This past September, the Western Quebec Teachers’ Association (WQTA) voted 96.7%
in favour of the six day strike mandate proposed by the Common Front. This movement includes several unions from across Québec including the CSQ, who are
working in close partnership with the Fédération des syndicats de l’enseignement (FSE) and the Quebec Provincial Association of Teachers (QPAT). WQTA is a local QPAT branch.
The sticking points are class sizes, working conditions, and the classification of students with learning difficulties. Teacher’s salaries are also a concern; the government offered teachers a freeze on the first two years of their collective agreement and a 1% increase for the last three years. The yearly salary increase from the former collective agreement was 0.5 %, 0.75%, 1%, 1.75% and 2% for the fifth year. Average annual inflation between 2010 and 2015 reached 1.55% according to the Bank of Canada.
The former collective agreement expired at the end of March.
Unless progress is made at the negotiating tables, education workers across Quebec will strike again in December, this time for three consecutive days.
Pontiac Community Hospital
On the same days as the school strikes, hospital workers circled the
parking lot at the Pontiac Community Hospital waving flags and blowing whistles to protest the changes to the healthcare system since it became the Centre intégré de santé et de services sociaux de l’Outaouais (CISSSO) in April.
With cutbacks amounting to about $32 million, in order to balance their budget, many jobs were abolished within the CISSSO.  The former Centre de Sante et de services sociaux du Pontiac was not as hard hit by the cutbacks as other establishments, such as the former CSSS du Gatineau, due to its minimal deficit.
All healthcare workers received a notice in April informing them about a reorganization (titled ‘La Brascule”), which came into effect at the end of October; at this time workers were informed about what jobs they would hold and where they would be located, as well as how management was going to be organized within the
system.
Some positions were abolished with new
positions opening up, many of which are now located in Gatineau, leaving workers with the option of quitting and accepting a severance package, moving, or
commuting.
Other reasons for the strike include a lack of contracts for some workers and the fact that some union workers haven’t received a wage increase since 2004. Additional strikes are planned for every month on different days.
Community supports
education
On November 2, a group of more than 40 parents and other community members joined hands in front of Dr. S. E. McDowell School in Shawville
to demonstrate their
support for teachers and
support staff fighting the
government’s cutbacks to
education.
“It doesn’t matter where your child attends school; this is for all students across the province. The government cuts are deep and will affect all students – increased class sizes, no coding for children with IEPs, no support aids in the classrooms, cuts to essential services like CLSC nurses in schools, programming cuts … budget cuts that will directly impact a school’s ability to operate effectively,” said organizer Ronda Richardson.
The demonstration was part of the “je protege mon ecole publique” movement where parents and community members across the province held hands to send a message to the government that they stand united to protect their children’s education.