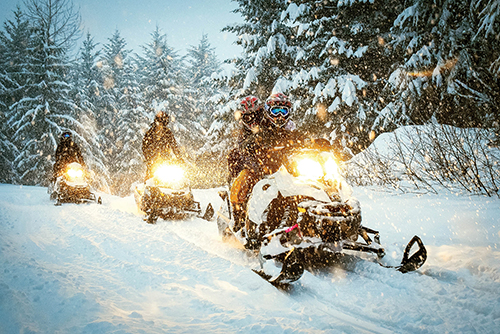 BRISTOL – Frustrated with the Fédération des clubs de motoneigistes du Québec’s (FCMQ) lag in opening a snowmobile bridge connecting the MRC Pontiac to Ontario, a local resident who initiated its development believes the region is losing an important opportunity to attract significant touristic revenue this winter.
Alain Goulet, former volunteer manager of special projects for the Outaouais Snowmobile Trails Association and president of the Pontiac Snowmobile Drivers Association (PSDA), told the Journal that the bridge stretches just under one kilometre long – making it one of the largest snowmobile bridges in the world. He began working on the file two years ago.
Blaming the delay on a “technicality” imposed by the FCMQ, he explained that local snowmobilists are asking the federation to open 8.9 km of trails on the Quebec side along with the bridge – without asking for recurring subsidies or financial support.
Located near an old rail line at Pontiac Station in Bristol, he added that the bridge would be a touristic gateway for the region and be economically beneficial for local businesses. “The targeted clientele have the means to afford outings in the Pontiac,” Goulet said.
Goulet said the bridge would enhance public safety by replacing an unsupervised frozen traverse between both provinces.
He noted there has been a bridge connecting the Pontiac to Ontario in Portage-du-Fort since 2015, but trails leading to it aren’t subsidized.
Goulet claims the bridge is ready to open on both sides of the Ottawa River; it has been safeguarded with secure railings on both sides due to nearly $500,000 in private and public-sector investments, mainly obtained via the West Carleton Snowmobile Trails Association (WCSTA).
On the Ontario side, Goulet claims an engineering analysis shows the bridge meets public safety standards, access permits have been obtained, and the requested trails are legally insured. On the Quebec side, he said required trail access permits have been procured, the trails are properly insured and they’re included in
the MRC Pontiac’s urban development plan.
But still, the FCMQ hasn’t provided a resolution on its status, Goulet said. “An official response remains impossible to obtain. They hung up on us,” he added.
Goulet said the
Ontario Snowmobile Clubs Federation (OFSC) have been waiting since May for the FCMQ’s confirmation that the trail will be added to its maps before adding it to their own.
“Volunteers are completely exasperated on both sides,” Goulet said. “The FCMQ’s [inaction] destroys all motivation of volunteers who manage these complicated files,” he added.
Goulet said he and WCSTA President Paul McDonald have quit their efforts to pursue its completion due to frustration with its progress. “I’m tired of fighting against the [FCMQ]. They don’t move any projects forward,” he concluded.
File “98% finalized” says FCMQ
Stéphane Desroches, FCMQ Director General, said the file is progressing positively and should open this winter. He claims Goulet’s formal request to open the trails presented to the federation’s Comité sentiers was submitted in July.
“If [the request] was made before, unfortunately, who made the error, I don’t know,” Desroches said.
In an email submitted to the FCMQ on May 5, Goulet did indeed request for the desired trails to be added to the official Quebec maps. However, Francois Saumure, FCMQ Outaouais liaison, said a resolution signed by the PSDA was required in order to analyze the trails for approval.
Desrochers noted the matter is now being solved by a group of volunteers who recently took charge of the file. He added that the FCMQ has done its part and is waiting for the OFSC’s response regarding the proposed trails and whether or not the bridge is safe.
“They need to present documents showing they’ve met their requirements. Does the bridge measure up to environmental standards? … On our end everything is fine,” he told the Journal.
“I think it’s about 98% finalized,” he added, stating the OFSC needs to conduct a re-analysis of its trails as well.
He said he initiated a meeting with the Comité technique to bring the conundrum to conclusion, but Goulet responded with stubbornness. “There was a proposition, but [Goulet] didn’t want to accept it.”
Desrochers emphasized the need to follow every legal step of such a significant project and evaluate its environmental, social, and financial impacts. “Our role is to apply the rules and principles,” Desroches said. “So, I think there’s a misunderstanding on [Goulet’s] behalf.”
Desroches said the OFSC plans to meet and discuss the matter on November 6.
The Pontiac Journal contacted McDonald and OFSC for comment but didn’t receive a response in time for print.