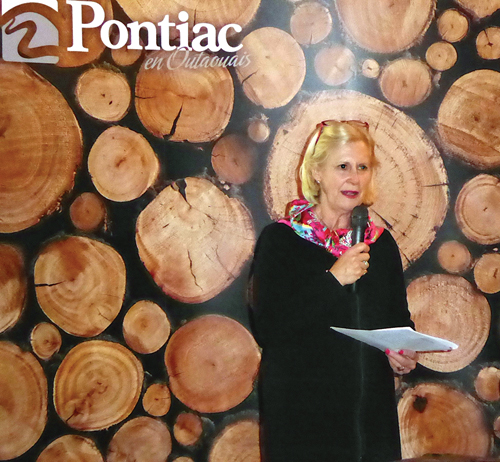 Deborah Powell
BRISTOL – “The Pontiac is on the brink of being discovered,” announced Jane Toller, president of Tourism Pontiac (TP), in her opening words at the organization’s Annual General Meeting, April 12, at Pine Lodge. She explained more visitors are coming from a variety of places and that working with the Ottawa Valley as a whole and benefitting from improved coverage with Tourism Outaouais are both essential elements to increasing tourism locally.
“We are all volunteers representing different sectors of tourism,” said Toller. “We also hope to achieve more funding for TP in order to better do our work.” Board directors agreed to continue in positions held and Vince Accardi agreed to fill the one vacancy. Accardi is currently Director of Policy and Stakeholder Relations at the Tourism Industry Association of Canada and brings many years of experience in the sector.
MRC Tourism Officer Chantal Lair did an introduction to the new TP
website. “It’s more attractive, image rich and easier to navigate,” she said.
John McDonnell, executive director of the Canadian Parks and Wilderness Society (CPAWS), gave an update on the sectors of the Dumoine, Noire and Coulonge rivers that are to be designated by Quebec as protected areas. He asked everyone to help put pressure on the government to finalize the areas as soon as possible. CPAWS’ Jessie Lever spoke about the first annual Dumoine River Art Camp to take place August 2-7. The camp will bring together a variety of artists from communities across Eastern Ontario and Western Quebec. Those selected to participate will do so for free, but are asked to donate a piece of work to be included in exhibitions in the fall of 2017.
The sport of swimrun will return to the Pontiac. Organizer Simon Donato described the second annual Amphibious Challenge, scheduled for Sheenboro from September 8 – 10, and the benefits such events bring to the region. Recognized in 2017 as an official swimrun event, one of only three in North America, the races attract participants from near and far, including a group from Texas already booked for this year. Donato also shared his knowledge on how to attract the 39-49 age group to the region.
Emerson Velasco from Tourisme Outaouais offered a sneak preview of the new Outaouais tourist route, Les Chemins de d’eau, which will be officially launched in June. Three primary Pontiac heritage destinations will be featured on the route: the Pontiac Museum in Shawville, Bryson House in Mansfield and Chutes Coulonge.  The route will be well publicized, including signage, and is expected to attract many new visitors. The theme of the route is the Ottawa River.
“We are excited to be a featured part of the Chemins d’eau and hope to partner with every business in the Pontiac to take advantage of the potential,” said Dennis Blaedow, board president at the Chutes.