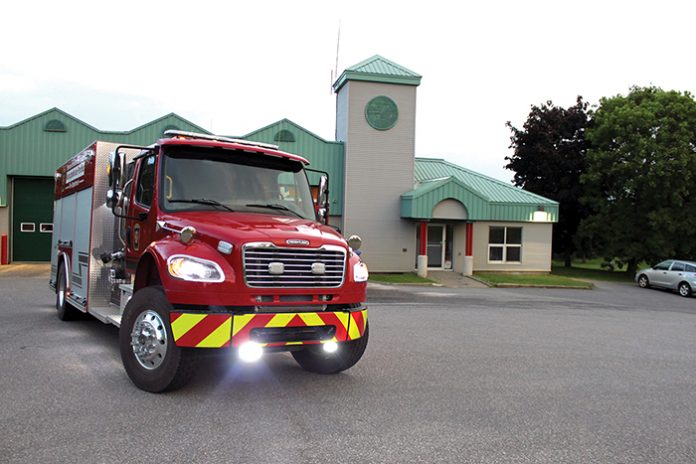 MUNICIPALITY OF PONTIAC – In light of recent allegations that the Pontiac Fire Department is lacking basic equipment and water at the Breckenridge station, the Pontiac Journal interviewed Fire Captain Evan Prest and Eligible Lieutenant Stephane Tremblay for their comments on the condition of equipment and water use at the facility.

Fire Captain Evan Prest stated that repairs to the well and pump at the Breckenridge fire station have resolved previous water supply issues experienced at the facility. Prior to the repairs, trucks at Breckenridge were washed with river water or brought to the station at Quyon to be washed due to water shortages. The fully functioning repaired well and pump now allows firefighters to wash the trucks at the station and to use the washroom facilities on site without issue.

Prest further explained that the water used to fill the trucks is independent of the well water that supplies the station’s washrooms and taps. Municipality of Pontiac fire trucks are filled from an 8,000 – 10,000 gallon tank stored underneath every fire station which is regularly refilled or shuttled from another station. Prest stated that the tank at the Breckenridge station remained full throughout the time that the station was experiencing issues with its well.

Eligible Lieutenant Stephane Tremblay explained that as an added safety measure, in the event of a water supply issue at a station, firefighters can also fill up a truck by the river with a portable pump or at a hydrant. He also shared that there is an agreement with the Municipality and the Ville de Gatineau which allows firefighters to fill up their trucks at the hydrant in Gatineau if needed.

In response to allegations that the fire department lacked basic equipment such as a second 30-foot ladder for evacuating buildings, Prest and Tremblay clarified that the Fire Department has two 30-foot ladders at the station in Luskville which have both been inspected and are deemed to be in good condition. Each fire truck in the fleet is also equipped with its own set of 24-foot ladders.

While the department does not have as large a budget as other municipalities, both Prest and Tremblay felt that the current equipment is adequate for properly functioning fire services, “There are always going to be challenges, you have to work with those challenges and do the best you’ve got. While we have around a quarter of the budget Chelsea has, we have a good fleet of trucks and we have good equipment. I don’t see anything as hazardous to my health and safety, I have never been worried after putting on my equipment that it will malfunction,” said Tremblay.

Prest noted that the fire department is currently in a period of transition after the previous fire chief Kevin Mansey resigned, “We’re trying to do our part to fill some shoes after the
previous director left. We are trying to keep the department rolling. We’ve always had challenges, there have been ups and downs, but we really just want to work and help our community out.”

According to Prest and Tremblay, there are currently 29 firefighters on the roster and 3 more in training. All of the firefighters at the department are trained to Quebec standards which involves four years of training in total.