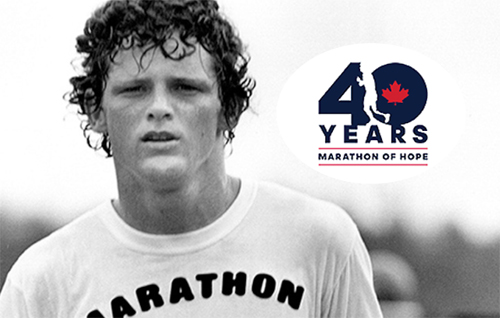 MRC PONTIAC – On April 12, 1980, Terry Fox dipped his artificial leg into
the Atlantic Ocean, at St. John’s Newfoundland launching his Marathon of Hope. After 143 days, running an average of 42 kilometres a day for a total of 5,373 kilometres, Fox stopped outside of Thunder Bay; his primary cancer had spread to his lungs. Before returning to B.C. for treatment he said, “I’m gonna do my very best. I’ll fight. I promise I won’t give up.” A year later, Terry Fox lost his battle, but the example he set has inspired millions of Canadians who join his efforts every year in the Annual Terry Fox Run/Ride/Walks held across Canada – and around the world – to raise money for cancer research.
The Pontiac will take part in honouring the 40 years since Terry Fox’s incredible journey, but given the realities of the COVID pandemic, it will be a little different. This year’s theme is “Try like Terry!” and participants are asked to set a personal goal
and track their progress between August 22 and September 20. Participants can register online as an individual or with a team at www.terryfox.org/run. And download the app to track your steps.
“Challenge yourself to do something novel – swim extra lengths in your home pool, kayak, do yoga each day or simply get out on September 20th and do it “One Day. Your Way” says Pontiac’s co-organizer for the past 39 years, John Petty. “Try like Terry!  Let’s keep his legacy alive.”
For more information contact:  Rick Valin: rickvalin@gmail.com  or John Petty at 819-647-2402.