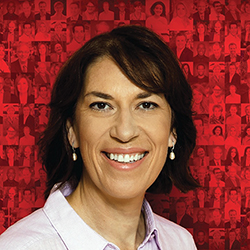 Liberal Sophie Chatel was officially named Member of Parliament for the Pontiac riding.

PONTIAC – Liberal Sophie Chatel has been officially appointed as Member of Parliament (MP) for the Pontiac riding, receiving more than 43 % of the vote in Canada’s 44th federal election held on September 20.
In the Outaouais, the Pontiac riding represented the highest voter turnout with 65% of electors participating, compared to around 59 % in Gatineau, and 52 % in Hull-Aylmer – where the Liberals also were victorious.
In the Pontiac, Conservative Michel Gauthier came in second with 20.6% of the votes and Gabrielle Desjardins of the Bloc Quebecois in third with 16.8%.
The day after celebrating her team’s victory, Chatel told the Journal she felt extremely gratified to get such resounding support from Pontiac constituents and she looks forward to voicing their concerns and priorities in the House of Commons.
Proudly settled in the Pontiac with her family for around 20 years, Chatel said she’s well aware of the Pontiac’s priorities and is committed to serve her constituents.
“It’s really all about being a representative for the people of my community, who are extraordinary … it’s an honour and obviously a great responsibility,” she said.
Chatel said the campaign was a hectic challenge, but a memorable experience with a rewarding outcome. The campaign only lasted 36 days and was Chatel’s first venture in politics after a lengthy career in the business and finance sector.
Her initial goal as the new MP for Pontiac is to get acquainted with community players and leaders.
On a national scale, Chatel wants to put her economic knowledge and commercial expertise to use to contribute to Canada’s economic recovery with environmentally sustainable measures and investments in innovative development sectors and renewable energy.
Stepping in the shoes of Will Amos, Chatel also hopes to help solidify the Liberal Party’s national action plan to fight climate change (established in 2018) with pragmatic actions and measures. “A great challenge awaits us. We need not only goals, but concrete ways in all sectors of the economy to attain them,” she said.
She stated that Canada’s transition to a fully-green economy requires implementing legal measures to ensure polluting isn’t profitable, and facilitating the collaboration of businesses and citizens to the government’s vision, notably with further investments in electric transportation.
Locally, she stressed the need to significantly improve healthcare services in the Pontiac, and to serve as a catalyst for the region’s economic resurgence. She added that the riding is relatively underfinanced compared to other parts of the province, and things need to change in that regard.
She intends to keep a close eye on the federal government’s recently launched Operation High Speed Internet initiative, which plans to connect the vast majority of homes in the Pontiac to high-speed internet by September 2022.
She added that supporting the Pontiac’s agricultural and agro-tourism industries, protecting its farmers and ensuring the health of their crops is vital to keeping the region thriving economically and environmentally.
Implementing solutions to ensure preservation of Gatineau Park is another top priority.
Chatel believes the federal government must act to ensure its promise to bring clean drinking water to remote rural communities, and she emphasized the importance of reconciliation with Indigenous communities as well as serving their priorities.
Regarding the pandemic, Chatel emphasized the important of encouraging vaccinations, stating it is the only solution for Canadians to bring life closer to how it was in 2019.
Boasting a Bachelors’ degree is law from the University of Montreal, a Masters’ degree in Taxation from the University of Sherbrooke, a CPA accounting certification, and an extensive career in both fields of study, Chatel formerly worked as Head of the internationally-recognized Organization for Economic Co-Operation Development’s (OECD) Tax Treaty Unit, addressing a number of global financial issues with the United Nations.
With the OECD, Chatel negotiated solutions to tax-related issues attributed to economic digitalization, notably leading to an unprecedented deal seeing 134 countries recently implement a global minimum tax on large multi-national companies, including web giants.
She also previously worked at the Department of Finance Canada and the Canada Revenue Agency, where she contributed to the Canadian government’s international tax policy.