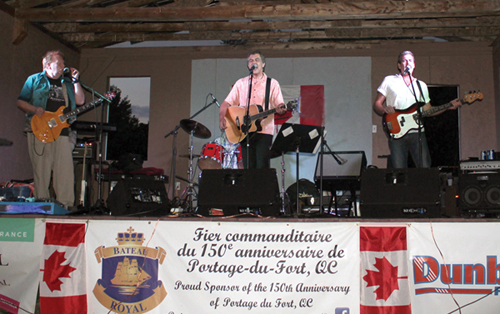 PORTAGE-DU-FORT – For a municipality that’s older than the country of Canada, a power outage wasn’t going to stop its 150th anniversary celebrations, July 18-21.

PORTAGE-DU-FORT – For a municipality that’s older than the country of Canada, a power outage wasn’t going to stop its 150th anniversary celebrations, July 18-21.
“We had music all weekend and a real nice crowd; people came from out west and California,” said Mayor Lynne Judd Cameron. On July 19, the day of a major storm, the show went on as Trash Taxi played with generators. Weekend activities included a buffet supper, magic show, Little Ray’s Reptiles, bike parade, and Show & Shine. St. James the Greater Catholic Church held a Mass on Sunday that featured music and song as might have been heard from 150 years ago.
Cameron noted that over the course of 2013 there have been a New Years’ eve party, dart tournament, St. Patrick’s Day event, Champlain “voyagers”, and a Copycat Opry to tie into the special year. A few more upcoming events are in the works as well as something for Remembrance Day. Commemorative sweatshirts, t-shirts and hats are also available for sale.
The July 20 day long ball tournament saw Fuzzy Grapes on top, winning $700. Committee organizers Kevin Murphy and his wife Jennifer were on the team, “It wasn’t rigged,” he said with a laugh. Eight teams played three games each and the top four played four games. The Ball Busters came second for $450 and Shawville / Clarendon Fire Department third for $300.
Along with Cameron and the Murphy’s, volunteers included Alan Farrell, Joanne Brinkworth, Melissa Soulière, Stephan Scrak, Father Basil Tanguay, and Janis Thompson. “The work is worth it,” said Thompson. “Everyone is having a good time.”
Fireworks at the ball field capped the evening while Fifth Street played music into the night (photo). “The happy faces say a million things,” added Cameron.
Venetia Crawford and Bob Simpson of the Pontiac Archives, have complied a book for the anniversary and tell of the history behind the buildings in the town. For example, the Stone School Art Gallery, built in 1855 as a schoolhouse, was gutted in the 1914 fire of the town. It was rebuilt the same year. Also, the Prince Arthur Steamboat was the first passenger boat to arrive in 1871. It caught fire and sank here in 1877. Three divers of the Underwater Society of Ottawa visited the ship’s site in 1965.