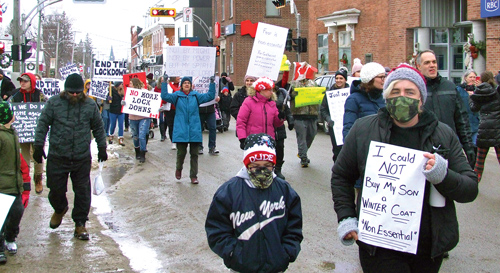 About 70 people protested the government’s lockdown measures in the streets of Shawville, January 3.

SHAWVILLE – Around 70 demonstrators walked the streets of Shawville, January 3, waving signs and voicing their disagreement with Québec’s lock-down measures and public health restrictions during the pandemic.
According to one protestor, Melinda Hodgins, there really wasn’t one sole organizer of the demonstration; it was born from discussions on social media where there was a general consensus that something needed to be done. Most people denounced the effect the restrictions have had on small businesses and what is deemed essential or non-essential, while others questioned limits on religious gatherings and the need for a lockdown when Pontiac’s case counts are so low.
“There will be more protests throughout the Pontiac. We will never give up the fight for our rights. Our area has very few cases so we never should have been placed in a red zone,” said Hodgins. Another protest was held in Fort-Coulonge, January 9, with about 50 participants.
Another protestor, Jackie McBane, described how she was unable to replace her son’s winter coat after his broke because stores are not allowed to sell clothing, as it is deemed non-essential. She said she is thankful to live in such a supportive and helpful community because many people messaged her offering to help and someone eventually gave her son a coat.
“The measures are adding a lot of stress on the population, both residents and businesses. Something needs to be done. Many small businesses are closed while big box stores remain open,” said Pat Goyette, who attended the protest.
But the event wasn’t without some backlash of its own. Several people who saw pictures and videos on social media decried that few people wore masks or kept a physical distance from others. The Sûreté du Quebec intervened at one point to reiterate the need to wear masks and keep a safe distance from others.