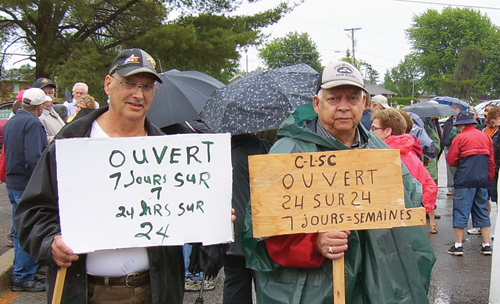 MANSFIELD – On June 22, about 75 people gathered at the Herault Street parking lot of the CLSC to protest the closure of its emergency centre between 6:30pm and 8am (13.5 hours a day) beginning June 24 until September 2, 2013. A note on the entrance instructs people who have ‘after-hours’ medical emergencies to call 911, or to go to the Pontiac Hospital in Shawville, 41kms distance.

The CSSS du Pontiac board of directors are calling the reduction ‘temporary’, citing a lack of physicians to staff the emergency room, which has had public access 24 hours / 7 days a week since the facility opened in 1992.

“We need to pressure the government and get more doctors here,” said Mansfield mayor, Leslie Bélair, noting most local doctors currently work 70+ hours a week. According to him, and to Fort-Coulonge mayor, Raymond Duroucher, also at the demonstration, the hospital board and staff agree with the protest, and with a petition that has over 4,000 signatures.

CLSC director of services, Guylaine Marcil, explained to the crowd that the salary paid to doctors is not an issue. “We just don’t have enough doctors,” said Marcil of the fact that currently in the Pontiac there are two who are ill, two who are leaving the area, and two who have requested summer holidays. Since 2007, the CSSS du Pontiac website has had a posting seeking six additional doctors for the area.

Jérôme Amyotte, a CLSC Foundation founding member, asked if there could at least be a nurse on duty during the closed hours. “It would be better than nothing,” he said. There is the greater concern though that after September 2 the situation will not return to normal (open 24/7).

“After today, what happens?” asked Mansfield resident, Frank Doyle. “Let Mister Grimard [CSSS du Pontiac director general] put his job on the line and back up his words. There have to be some doctors in Quebec to send here.”

Chichester mayor, Donald Gagnon, the only other municipality represented, added, “Our Chapeau CLSC is constantly being downgraded. My fear is that this shutdown [Mansfield CLSC] will be extended further.”

“It’s always the same for the Pontiac: cut, cut, cut,” said a Sheenboro resident who has used the emergency services in the past. “Where are our representatives [MP, MNA, other mayors] when we need them for leadership? We all need to be here and fight for this.”