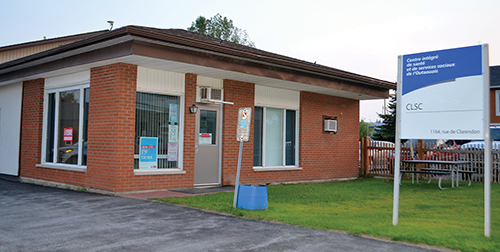 MUNICIPALITY OF PONTIAC – The fate of the CLSC in Quyon has been the center of local attention after owner Joanne Marcotte put a ‘For Sale’ in the building’s window due to a lack of commitment from the Centre intégré de santé et de services sociaux de l’Outaouais (CISSSO) to renew its lease. During a press conference on July 30 outside the CLSC, several people denounced the situation.
Pontiac MNA André Fortin believes the situation should never have gone this far and CISSSO could have settled the matter. “It’s a difficult situation and it shouldn’t have even gone this far. It’s a disregard for the owner of the building, but also for the local community, the people who receive their health services here,” said Fortin.
Dr. Ruth Vander Stelt, a physician working at the Quyon CLSC, noted the location employs about 15 people who were shocked and confused when the ‘For Sale’ sign was posted in late July.
“Patients are extremely concerned. I’ve had everyone in my office asking “What’s going to happen?” The sad thing is, I have no idea and the only thing I can tell them to do is to contact who —someone in the Pontiac? No, someone in the city and they don’t return their calls. So we’re glad the media is here because we don’t have another option. We have no one to talk to,” she said.
Marcotte said she had no guarantee that CISSSO would renew the lease and hadn’t heard from them since March 2. So she decided to post a ‘For Sale’ sign in the window overlooking the parking lot.
“I can’t keep the building without a tenant,” she told the Journal. According to Marcotte, CISSSO only
contacted her about the renewal about 30 minutes before the press conference.
CISSSO, however, said it has no intention of closing or moving. “It was never our intention to move or close the Quyon CLSC. The services offered at the CLSC are important to the community. The renewal process is underway and we are meeting with the owner [soon],” said CISSSO media relations officer Patricia Rhéaume.
Josey Bouchard, spokes-person for the Pontiac Voice citizen’s group, said the situation is unacceptable
and current management should be fired.
“We have a simple lease renewal here, and the landlord, rightfully, wants to renew different conditions and she’s not getting any response. A last-minute call, 30 minutes before a press conference, saying, “Oh, we’ll meet with you and we’ll be very happy to see what we can do” is unconscionable. It’s disrespectful. In the short term, managers should be fired,” she said.
Bouchard and Vander Stelt believe the solution is to bring back local decision making and authority. “We’re not a suburb, we’re a rural community and it’s very different. We don’t work the same way, people don’t have the same transportation options or the same needs as people in the city, so we really need to have local management back in charge; real management that can respond to people and employees and give them a yes or no when it’s needed quickly, and not three months later,” said Bouchard.
A meeting was to take place between Marcotte and CISSSO last week to continue negotiations to renew the lease.