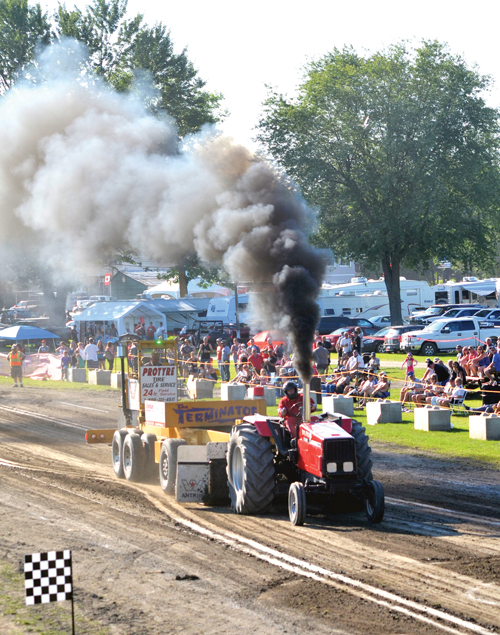 MUNICIPALITY OF PONTIAC – Dust was flying and engines were roaring as the second annual Quyon Tractor and Truck Pull was hosted July 29 at the Quyon fairgrounds. Over 1,000

MUNICIPALITY OF PONTIAC – Dust was flying and engines were roaring as the second annual Quyon Tractor and Truck Pull was hosted July 29 at the Quyon fairgrounds. Over 1,000
spectators watched 42 pullers in nine class divisions. At the end of the day, Terry Provost won both heats in the Modified Tractors class with 369 and 412 foot pulls. He was awarded the Donnie Campbell Memorial Cup.
Although it might look easy, controlling the vehicles takes the right combination of skill, power, traction and balance. “You more or less get on it and go. You have to judge your weight. If you have a soft track, you have to shift weight backwards. On a hard track where you get more traction, you bring it forward. If the front end lifts up, you have to steer with your brake pedals,” said modified tractor driver Paul Davis, who has been pulling for the last three years. “You have to check out the track and see what it’s doing with the other competitors. You then do some calculations to decide what you are going to do with your pull,” he added.
In a pull, tractors or trucks pull a heavy vehicle known as a sled down the track. Vehicles in each class pull a set weight in the sled and the track is
flattened and smoothed after each run for a level playing field.
Mark Stanton has been competing since he was 16 years old, first with antique tractors, trucks, and now modified tractors. He placed second this year in his division with ‘The Canadian Outlaw’.
The pull winners were: Pro Stock Tractors – both heats won by Jody Langton ‘Bits & Pieces’; 2WD Modified Trucks – Curtis Shea ‘The Mistress’ (heat 1) and Ray Venasse ‘Flying Ace’ (heat 2); 4WD Modified – Dwayne Newans ‘Wild Thing’; 1/2 Ton Trucks – Mel Smallman; 3/4 Diesel Trucks – Peter Kuzmich; 3/4 Ton Trucks – Riley MacGregor; Pro Street 3/4 and 1 Ton – Kyle Hamelin; Highway Trucks – Gaitan Lacroix; and Modified Tractors – Terry Provost ‘Grass Hopper’ (both heats).