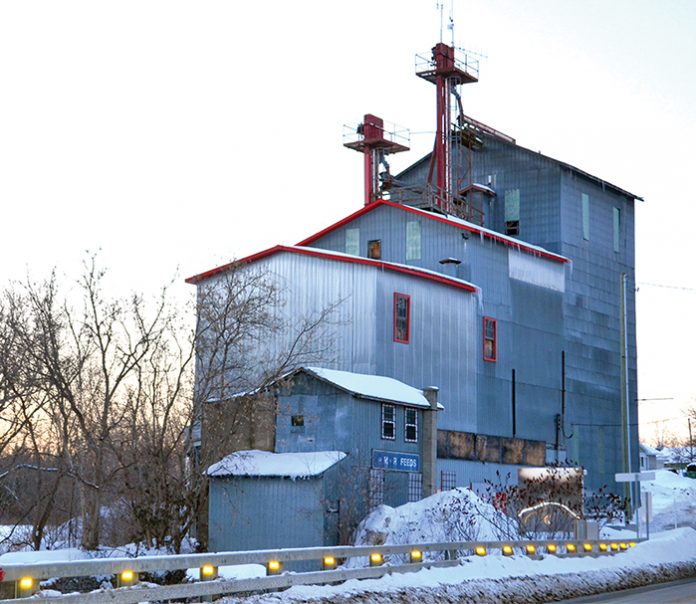 The Egan Mill in Quyon will soon be processing different baking flours.

QUYON – What’s going on with the Egan Mill in Quyon? Isabelle Lajoie and Marc Bergeron, owners of La Paysannerie in Bristol, have recently purchased the building at 5 Egan Street with plans to open it as a flour mill. They will focus on producing a variety of baking flours before adding other small projects, as the business develops. A storefront is planned for their farm products, and they’ll also offer to share their main street window with other local producers. “We plan to have an addition made to the Mill, towards the water to allow the public the opportunity to fully enjoy the location. We’ve also been thinking about a future café,” said Lajoie.

A small museum will be created, inside the Mill, featuring its history and one of its own old machines.

Repairing the building will require a lot of work. The Mill has sat, virtually abandoned, since it was purchased by the municipality in June 2010. Lajoie and Bergeron plan to renovate over the summer and produce their first batch of flour by November. As much as possible, they will source their organic grains locally. They will begin offering popular types of flour used for bread production – such as wheat, oat, white, and buckwheat – before expanding their collection to include other varieties.

La Paysannerie is in talks with a European company to purchase stone milling equipment. They are looking for automated equipment that will accurately reproduce the traditional artisan grinding method, and is scalable: they aim to reach 400-500 kilograms per hour.

The couple has been considering this project for a long time. Two years ago, they tried to get local producers to create a co-op for grain. They were originally trying to achieve a self-sufficient farm for livestock and to produce their own grain, after they noticed a lack of local flour. The COVID-19 pandemic and its homemade bread trends even led to shortages of some flours.

What began as a way to sustainably feed their animals, turned into an opportunity to grind flour for the community. When the Mill went up for sale, they realized they’d found a place, right on the main road, for the public to stop in and enjoy local Pontiac products. “It is the perfect location for it,” Lajoie added.

In its first year, Egan Mill will create 10 new jobs. They’ll advertise the job opportunities soon and will then train their new team.

“We hope that we will be well received by the community. It is our intention to revive the Mill,to attract tourism, and to grow in the Pontiac,” Lajoie concluded.