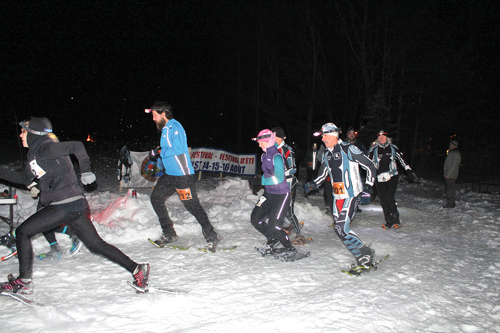 Nearly thirty racers set off from the start line, equipped with snow shoes and head lamps, to complete either a 5 or 10 kilometre race through the woods after dark.

CAMPBELL’S BAY – Nearly 30 people competed in the Pontiac’s first
snowshoe race at Brauwerk Hoffman on February 1, which raised funds for Special Olympics Canada. Pontiac native Paul Shea organized the event, which began early in the afternoon with a snowshoe walk that had over 100 participants, followed by the races at 7 pm. In total, about $1,400 was raised for the cause through registration fees and donations.
“I wanted to attract people to the area and promote the Special Olympics,” said Shea, who also competed in the race. Shea and Todd Hoffman, owner of the brewery, came up with the idea for the race fundraiser last year while Shea was visiting the business. The five kilometre trail ran through the woods on properties owned by Hoffman, the MRC Pontiac, and Shea’s brother. Those who competed in the 10 km trek ran the loop twice.
Shea has been involved with Special Olympics for about nine years after
he was approached by a representative of a health and social service organization who saw him out training with his special needs daughter, who enjoys
running. “They asked if she was interested in competing, and at the time, I
didn’t know about Special Olympics; there was nothing set up for the Outaouais.
I got together with some others to build a committee and form a team of
athletes,” explained Shea, who is now a volunteer coach.
According to Shea, he invested about eight hours a week since September to prepare the trail for the race, which began with cutting brush. Once the trail was
created, with the help of his brother and family, it was groomed after every snowfall.
In the end, all his work proved worthwhile judging from the day’s results and the public’s response. “There seems to be a popular demand for another event like this, so it looks like it’s going to be a go for next year too,” concluded Shea.
The winners, in order from first place, were: Men 10 km: Bruno Lafontaine (48m 56s); Dave McMan (49 m 50s); and Steve Meyer (57 m 27 s).
Women 10 km: Mary Thompson (50 m 31 s), Annie Jean (54 m 15 s), and Monica Kern (1 hour, 11 m, 34 s).
Men 5 km: Yvon Duval (32 m 34 s), Taylor Strange (34 m 02 s), and John Shea (41 m 14 s).
Women 5 km: Lise Meloche (28 m 37 s), Sylvie Jacques (33 m 26 s),
and Amanda Brandimore (34 m 09 s).