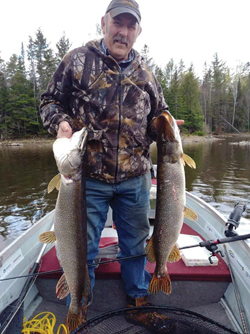 Evert Hodgins, an experienced lumberman, was killed in a bush accident in early August.

THORNE – On August 7, Evert Hodgins lost his life when a tree branch fell from high above and struck him. A lumberman with over 50 years of experience, he was working three kilometers in the bush when the accident happened.
Hodgins called his wife after the accident and asked that she mobilize his son Chris and nephew Rick Leaders, a first responder, because the two are experienced bushmen familiar with the area and would be able to locate him. They called 911 and first responders from Otter Lake, Thorne and Mansfield responded. Hodgins was taken to the Pontiac Hospital in Shawville where he was stabilized, but unfortunately he succumbed to his injuries en route to Hull.
“He loved telling stories about the Pontiac’s history,” recalled Debra Miron, Hodgins’ wife of 42 years. Bill Miron, his brother-in-law, recounted how he looked up to Hodgins like a big brother. “When I was 11, Evert, who was a few years older, took me for a canoe adventure. Huge dried stretches turned our hour adventure into an 8-hour portage. Evert made it into a lesson on how settlers navigated inland waterways. We both had a good laugh,” he said.
Locals also knew Hodgins from the band, ‘Evert and the Sidekicks’. “He played anything with strings: fiddle, guitar, banjo and the juice harp,” said his wife, adding that he sang ‘You Are My Sunshine’ every night to put his children Melanie and Chris to sleep.
Melanie says the family takes the support received from the community to heart. “He was well respected. It really helps us get through our grief. Now he’ll be an angel watching over his granddaughter Delilah who is fighting leukemia. I know he’ll whisper ‘You Are My Sunshine’ into her ear at bedtime like he did to Chris and I,” she said.
Those who wish to honour Evert Hodgins’ memory with a donation can visit
the ‘Fight for Delilah Grace’ GoFundMe page. A celebration of life will be held in September.