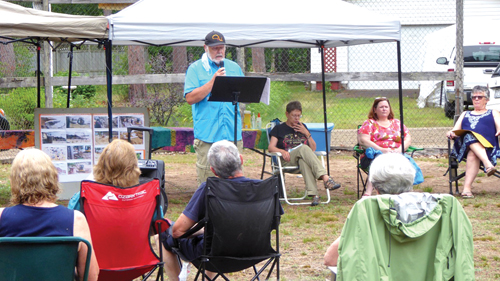 A member of the Protectors of the Sand Bay Waterfront explains what has transpired since September 2019.

CLARENDON – More than 60 people turned out at the Sand Bay ball park, July 11, where the Protectors of the Sand Bay Waterfront group explained what has transpired since a waterfront home installed a septic system with a drainage pipe running under the beach and into the bay in September 2019.
The formation of a large algae bloom at the end of the pipe last March and the inability to get answers from the municipality sparked the creation of a Go Fund Me campaign as the group determined they had no alternative but to seek legal advice. Over $13,000 has been raised to date, but legal fees have brought the group’s finances down to under $10,000.
The group’s major concern is what they perceive as the municipality’s “lack of due diligence” in granting the permit for the septic installation. After doing some research, the group claims the system in question, a Bionest, isn’t
suitable for Sand Bay beach because it shouldn’t be installed on a flood plain, where motorized vehicles might pass over the discharge pipe, nor where
there is inadequate water flow at the discharge point. There is also concern with the rock used to fill in at the end of the discharge pipe, which is sharp and was exposed following spring flooding.
According to the municipality, the homeowner received all of the appropriate approvals and permits from both the Ministry of the Environment and the municipality. The Ministry inspected the work and determined there were no deficiencies after it was installed last fall.
“We want safe, clean water and need your help,” said a group spokesperson, explaining a number of ways to contribute: becoming a member, joining the executive committee, helping with research, letter writing and/or fundraising. “Let’s continue to be good neighbours. We can’t take the beach for granted. Please step up and get informed,” she concluded.
The group is planning a demonstration prior to the next council meeting, July 21.