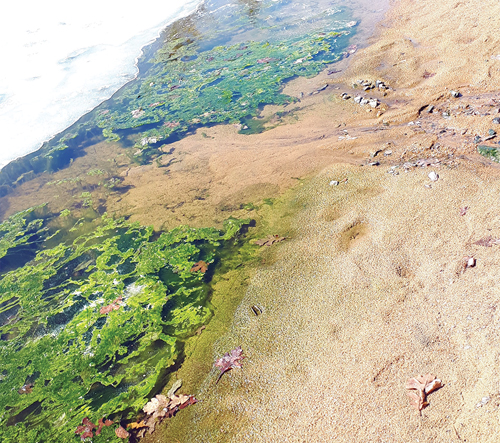 A newly-formed algae bloom near the site of a septic effluent pipe has caused local residents to seek legal counsel to get answers.

CLARENDON – A group of citizens concerned about the safety and health of the Ottawa River, particularly in Sand Bay, are seeking legal counsel after a large algae bloom was discovered on Sand Bay Beach where a septic pipe draining into the Ottawa River was installed last fall, a project the group strongly protested.
The Sand Bay Steering Committee, which represents over 200 Pontiac residents, said they have been “stonewalled and stalled” in their pursuits to get answers, so hiring a lawyer is their last step. “We’ve exhausted all options and are asking for donations to help hire a lawyer who can help us get answers about water quality, water safety, why this was allowed, who is responsible, etc.,” the group said. As of press time, its Gofundme page raised over $7,600. The group also filed an access to information request with Clarendon to get a better look into the septic’s approval.
“The Algae bloom is at least 6 feet across. Algae is known to grow very quickly in warm water. It’s uncommon for it to grow in cold water,” they continued,
noting the bloom has spread considerably in the last couple of weeks.
The Committee questions whether the location where the septic discharge pipe was installed meets minimum flow and dilution requirements for the system to be considered safe since Sand Bay is a quiet enclosed beach with calm water.
The bionest septic system was installed on a beachfront property in Sand Bay in September 2019; a small discharge pipe running into the river was buried under the surface of the beach. After attending Clarendon’s council meeting, a group of about 30 residents also spoke to the MRC Pontiac’s Council of Mayors in October.
Clarendon emphasized the homeowner received all appropriate approvals
and permits and Mayor John Armstrong explained the shoreline is under
the Ministry of the Environment’s jurisdiction, so the municipality must abide by its regulations and decisions. “Granting the permit wasn’t a choice, but an obligation,” he said, noting the municipal lawyer determined both the municipality and landowner met all obligations. The Ministry inspected the work and
determined there were no deficiencies.
“We’re not asking if there was a permit, we’re asking how in 2020, a project like this is allowed, especially without public consultation,” said Nick Deeble, Committee member.
“We’ve never seen an algae bloom like this here and it only appeared after the discharge pipe was installed, so there’s no question the pipe has changed the chemistry of the water,” he added. Sand Bay residents paid for four water quality tests following the flooding last year, which, according to the Committee, came back clear. They are in the process of testing the water again.
Ottawa Riverkeeper was informed of the current situation and according to Katy Alambo, Riverkeeper biologist, they are looking into it and reaching out to relevant authorities. “We’re in the process of trying to better understand what might be impacting water quality. From pictures, it appears to be a bloom of green algae, which doesn’t pose a risk to human health,” she told the Journal.
“We don’t want the algae either way. It’s not nice and our beach was always
pristine. All we’re asking is for the problem to be fixed and our beach and its water to be clean,” concluded the Committee.
What is Bionest?
A soil absorption system, or Bionest, features two tanks: waste flows from the home into the first tank where solids are separated from liquids through settling. Waste water then overflows into the second tank where two treatment processes using billions of naturally-produced microorganisms eliminate pollutants.
The treated water then runs through a discharge pipe into the ground or a body of water, where permitted. In some cases, it runs into a third holding tank to be recycled for flushing toilets, irrigation, etc. According to the system’s website, the effluent quality is well above current government standards.