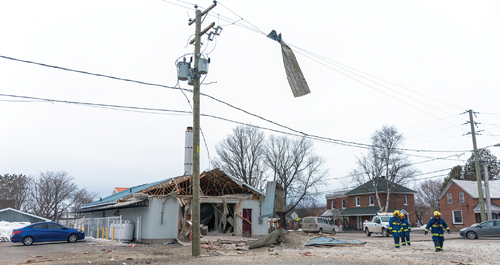 SHAWVILLE – Building debris could be found in a large radius surrounding Hayes’ crematorium on James Street after it exploded around 1 pm, March 19. The incident occurred while testing new equipment. “The equipment involved was an alternative technology to flame-based cremation, which operates under moderate pressure. The cause of the explosion is unknown and under investigation. This equipment will not be replaced or used by our company in the foreseeable future and we will continue to provide services as usual,” said owner Greg Hayes.
No one was injured but the building was extensively damaged as well as nearby hydro lines that left about 500 residents without power until around 4 pm. “Electrical wires were damaged by projectiles during the explosion. Fortunately, the damage was minor and we were able to repair them quickly,” said Alain Paquette, Hydro Quebec community relations agent.
A citizen saw the explosion and called 911. Lee Laframboise, Shawville Clarendon Fire Department Chief, happened to be driving by the area and saw blue flames coming from the hydro wires. There was no fire, so the fire department blocked the road and helped clean up debris.