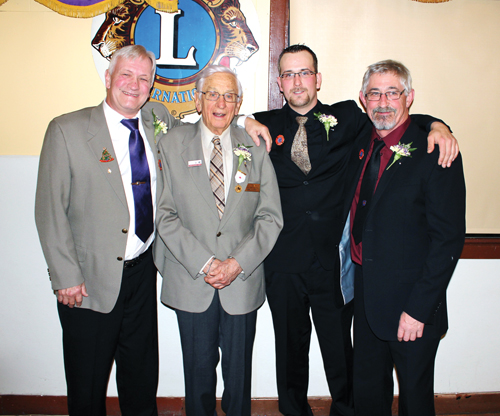 In 1949, the year the Shawville Lions Club was chartered, a loaf of bread cost 14 cents, a new house was $14,500 and you could mail a letter for only three cents; much has changed in the past 65 years, but not the under-lying reason for the Lions Club and the men who are members.
“We grew up poor and were given help from people, so you feel a responsibility to pay back to the community and help others,” said Dale Thomson, in a Pontiac Journal interview back in 2013 when asked why he joined the Lions.  Thomson is a Chartered Lion, which means that he was one of the original 50 men who started the club in 1949; he is the last remaining Charter member.
Every year, Lions clubs celebrate their Charter night; this year they
celebrated the 65 year milestone on November 22 at the Shawville Lions Hall. About 127 people came out for the evening including representatives from Lions Clubs in Sttitsville, Arnprior, Almonte, Douglas, Killaloe, Quyon, Pembroke and Bryson. The Shawville Lionettes were also special guests and gave all the Shawville Lions boutonnières.
The McDowell Glee Club opened the evening and a roast beef supper was served by Bob Smith. Senator Vernon White was the special guest speaker; in appreciation for his time, the Lions made a donation to the
charity of choice, the Dave Smith Foundation.

District A-4 Governor Rick McCauley, Shawville Mayor Sandra Murray, Clarendon Mayor Terry Elliott, Bristol Mayor Brent Orr and Ariann Bouchard, on behalf of MP Mathieu Ravignat also made short speeches.
Service awards,  given to various Shawville Lions members, were
presented by Jerry Callaghan, Hugh Young, John Musgrove, Dr. Grant Rogers, Dr. Earle Potvin, Barrie Murray, John Carmichael, Versil Smith and Dale Thomson, all who have served in the club between 29 years and 65 years.
There were also several special awards presented:  Dale Thomson was given the Harry A. Newman award from the Canadian Diabetics Association–a first for the club; John Musgrove was awarded a ‘Life Membership’, which means he no longer has to pay club fees; and
Dr. Earle Potvin was presented a Community Service award for his 50 years as a doctor and surgeon in the community and his many years of
service as a Lion.
“It was a very busy night,” said current Shawville Lions President, Dave Cumming, who has been a Lion for the past four years. “There are a lot of the members who have dedicated many years to the club and I wanted the night to go well, to honour them. I’m happy it’s over, but it was a ton of fun.”
Everyone took home a commemorative wine glass as a gift.           (LL)