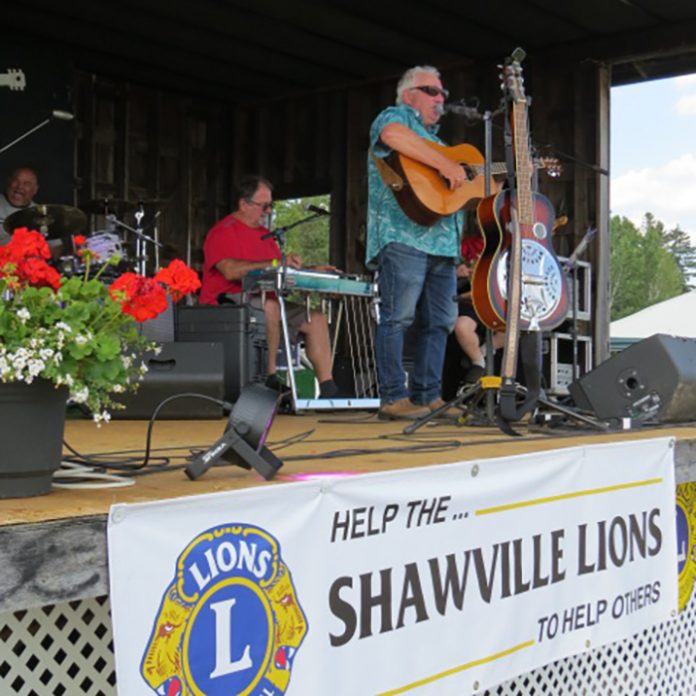 The Shawville Country Music Jamboree returned this summer, after a two year hiatus due to Covid, welcoming country music aficionados to the Armstrong Farm from July 14 to 17. The event was well attended, with rows of camping trailers bringing visitors to the Lions Club event.

The Jamboree was kicked off with a lively open mic night, giving local musicians the opportunity to play a couple of songs. The professional house band, “Unwound”, provided that familiar country music “twang.”

There were clear skies, a bonus for any outdoor festival, but there was also heat, which caused problems for some folks including the band’s fiddler, who was onstage Friday night when he became lightheaded. As a precaution he was taken by ambulance to the hospital where he remained under observation, unable to return for the remainder of the festival. “The band is up there for a long time each day, and it’s hard to stay hydrated when you’re playing that much,” observed one concerned spectator. “It’s very hot, and the band is playing from 1 p.m. until 11 p.m. They take breaks, but it’s a long day for them.”

On Saturday there was another last-minute hiccup, when local performer Joanne Dubeau announced she would be unable to take the stage. Country singer/songwriter Bob Webb, of Wakefield, was asked to step in as her replacement. “I’m always happy to play, but it was really hot onstage,” said Webb. “I hope Joanne is OK. She has a great voice; we were all looking forward to hearing her sing.”

Despite the heat, people were dancing. And at the end of each night, campers gathered to play music with each other, enjoying informal nighttime jams.